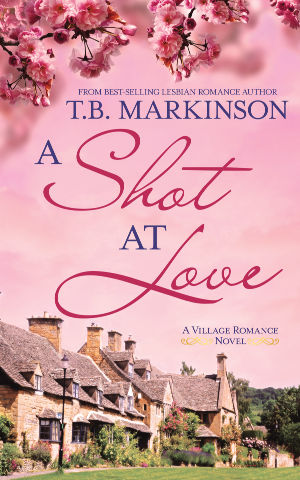 Can the sassy American win the shy Brit?

Josie Adams had a brilliant speechwriting career in American politics – until a scandal destroyed everything. Unsure what to do with the rest of her life, she moves home with her mother in the Cotswolds.

Journalist Harriet Powell ditched London after getting sacked and divorced within six months of each other. She hopes to find peace in the village, but after meeting Josie, Harry’s world will never be the same.

While the two don’t see eye to eye on the professional front, it’s hard to deny their connection, even if Josie’s mum is determined to set Josie up with anyone who isn’t Harry.

Can the two conquer their personal and professional struggles to let the other in?

Best-selling lesbian romance author T.B. Markinson teams up with Clare Lydon and Harper Bliss to bring lesfic readers a touching trilogy set in the Cotswolds. Grab your copy of the first book of The Village Romance series that’s the talk of the summer.