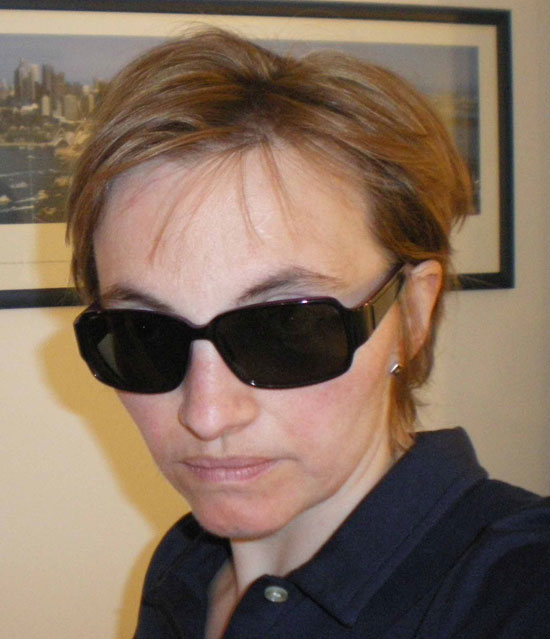 Evening then. Welcome to my new website, resplendent in red and black like a freshly laundered hooker. Let me set the scene for you. I’m sitting in my lounge, Scrubs is on the telly, the clouds outside are apathetically grey and there’s a crow sitting on the fence that keeps tilting its head at me. When I say sitting on the fence, I literally mean that – it’s not an indecisive crow.
Anyhow, for my first post I’ve decided to complete a bunch of sentences for your amusement. Here goes…

1. Never in my life: have I licked a steak knife. It’s a mantra I intend to carry on living by.

2. When I was five: I was really quite short, shorter than I am even now, so that’s really short. I had lofty ambitions though – I wanted to be a milkman. I had my own toy milk float and I used to deliver plastic bottles of milk to my neighbours. My nextdoor neighbour Jim even built a ramp up to his front door so that me and his daughter could deliver the milk without getting off the float. Nice guy, that Jim.

3. High school was: Not really anything like the ones depicted on American shows like The O.C. My secondary school housed bullies, ghosts of nuns and seriously deranged teachers who thought I was on drugs. I wasn’t – they just didn’t realise that their class was at 9 in the morning and I’m never awake at 9am. Even if I’m standing in front of you dressed and appearing to be, I’m really not.

4. I will never forget: the Take That comeback concert in Milton Keynes where they sang Never Forget while fireworks exploded in the ink black sky and tears ran down my friends’ faces. I didn’t cry, but I did get goosebumps – we never thought we’d see their return. Now of course Take That are everywhere and I’m a bit bored of them. Whoever thought I’d say that?

5. Once I met: Gary Barlow. It was at a One Republic gig, we’d managed to blag our way into the press bar and there he was, looking a bit dishevelled. I worked up the courage to approach him and asked for a photograph – Gary happily obliged and even leaned in. In response, I grinned at him like a maniac and whispered “I’m one of your biggest fans” in his ear, thus making it my proudest and distinctly unproudest moment all in one.

6. There’s this girl I know: who can touch her nose with her tongue. I know another who can put on lipstick while it’s secured between her breasts. I would like to have the first talent but while the second is admirable, I can live without it.

7. Once, at a bar: I got so drunk I fell off the bar stool. I think it was probably really funny to watch.

8. By noon, I’m usually: awake and procrastinating. I’m superb at it.

9. Last night: we hosted a dinner party for two good mates. We drank fizzy wine and ate oysters, salmon and raspberries, but not all on the same plate. We stopped drinking at midnight and had a cup of tea before bed. This is the difference between dinner parties in your 30s compared with those in your 20s. It doesn’t always work out like that though. Sometimes I drink so much the guitar comes out. That’s how you know I’m really drunk.

10. If only I had: joined a band when I was young, I might have been a pop star. That would have been good.

11. Next time I go to church: will be for my nephew’s wedding in July. He’s getting married in a stetson and cowboy boots. I’m quite impressed by this.

12. What worries me most: is anyone close to me dying. I’ve worried about it for 37 years so I guess it’s bound to happen sooner or later.

13. When I turn my head left I see: the side of my silver fridge, which is humming a new and more insistent tune today. There’s a picture of me and my girlfriend stuck to it in one of those cleverly magnetic frames, clutching champagne and looking ridiculously happy. There’s also a sheet of exercises I was given to do a while ago when I had trapped nerves in my back and arse. I should still do them now but I don’t. Bad me.

14. When I turn my head right I see: I see our 32-inch Sony telly which is showing Scrubs, the 542nd episode of the day. It doesn’t matter how many they show – my girlfriend will happily watch the lot.

15. You know I’m lying when: well, you won’t really. You’ll just have to trust me. But I wouldn’t because I lie a lot.

16. What I miss most about the Eighties is: how pure my love for things was back then. Erasure, brown eye shadow, John Hughes movies, cerise pink jumpers – I believed all of these were the truth. I also believed that the best beer ever was Budweiser, proving that you can’t be right all the time. My dad still remembers this fact about me and still tells everyone I know to buy me Budweiser if asked, even though I now think it is the devil’s piss.

17. If I were a character in Shakespeare I’d be: Romeo – purely for a bit of cross-dressing tomfoolery.

18. By this time next year: I’d like to have put up a towel shelf in my bathroom. Perhaps even a cabinet over the sink. But that seems a little over-ambitious.

19. A better name for me would be: Philip – that is what my parents were going to call me if I were a boy. They were also considering Judith, which I wouldn’t have minded – Hey Jude! I would like to be called Cass or Harper but I am stuck with Clare – my family would get confused if I changed it now.

20. I have a hard time understanding: numbers. And Excel. I could never be an accountant as both these things bounce off my brain without making the slightest indentation.

21. If I ever go back to school, I’ll: hate it all over again probably. And I certainly won’t play netball – stupid sport invented by tall people to humiliate short people.

22. You know I like you if: I make you my Facebook friend. I clear out Facebook every six months and delete about ten people every time. Having said that, there are some people on there who I haven’t spoken to for years. So really, you won’t know – you’ll just have to trust me! However, buy me a drink and you’re 90% there.

23. If I ever won an award, the first person I would thank would be: my mum and dad. And perhaps the person who invented Lindt Balls. I love Lindt Balls.

24. Take my advice, never: drink more than three shots of tequila in a row, even if they’re free. They’re still full of tequila.

25. My ideal breakfast is: scrambled eggs with smoked salmon on a bagel from the shop over the road. Or if I’m hungover a bowl of Vietnamese beef noodle soup – nourishing, tasty and rehydrating in the extreme.

27. If you visit my hometown, I suggest you: walk down the pier because it’s the longest in the world at one mile and a third. There is a train that goes up and down it for lazy people, but it only takes 30 minutes to walk it. 45 if you’re really fat. There’s a shop at the end and everything.

29. If you spend a night at my house: there will be good food, wine, women and song. Lots of singing. Did I mention that I like singing?

30. I’d stop my wedding for: Dustin Hoffman. That would be weird if he did that a second time wouldn’t it?

32. I’d rather lick the belly of a cockroach than: have my shins planed. Definitely.

33. My favourite blonde(s) is/are: Sharon Stone. Still gorgeous. And Pink. In her blonde phase like.

34. Paper clips are more useful than: Maroon 5 or The Frey. What is the point of them? I could easily live without either, but not paper clips.

35. If I do anything well it’s: eggs. I’m famed for my eggs. Boiled or scrambled, but not fried. Fried eggs freak me out and are inherently wrong.

36. I can’t help but: clean. Obsessively. And usually when I’m meant to be doing something else. If I’m working from home and have a deadline for an article, my kitchen will sparkle before any writing gets done.

37. I usually cry: at ER. That, and when I crack my leg on the sticky-out bit of my bed. This happens at least twice a week.

38. My advice to my child/nephew/niece: Do it while you’re young – carpe diem and all of that. Also, it’s never too late – look at me becoming a full-time music journalist in my 30s. Who’d have thunk it?

39. My aunty once: bought me a Victoria Plum toiletries set. I was 17 at the time. I thanked her profusely.