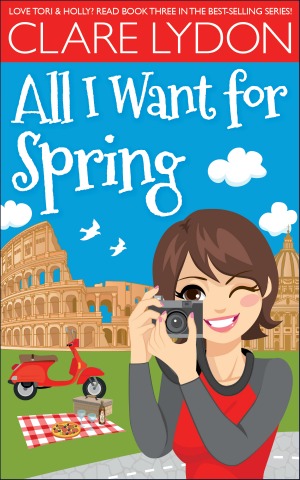 ALL I WANT FOR SPRING

“I still cannot believe you booked a flight this early.” Holly Davis puffed out her cheeks and exhaled, as she’d been doing ever since they got on the train. She slumped forward onto the chipped plastic table, resting her head on her crossed arms before peering up at Tori. “Do you have a sadistic streak I should know about before we go any further?”

Tori flashed Holly a widescreen grin. “If I tell you all my secrets now, how do I surprise you in the future?” she asked. “Besides, if I turn out to be the female Christian Grey, you get a car, loads of cash and flown wherever you want in a private helicopter, so it’s not all bad. I know I’d consider it.”

“When did you see the film? Next you’ll be telling me you’re planning on camping out to see the sequel.” Holly sat up, rubbing her face with her palms. “Tell me you’re not planning to do that…”

Tori laughed at her girlfriend. “I know you like serious movies,” she said, wrapping the words ‘serious movies’ in finger quotes, “and documentaries, but excuse me for liking chick flicks. I just do, you know that. I love romance, and I love everything about it.”

“Yes, all romance! Honestly, you are so judgey sometimes. I love romance, I love schmaltz, and I watched it over at Trudi’s house — she’s got some way of downloading all this stuff for free. And yes, Trudi’s already on the case for the sequel, so don’t worry, I won’t be camping out. I’ll be sitting on Trudi’s couch, drinking red wine and squealing at the red room.”

Holly shook her head, then slumped forward again. “Sometimes, I can’t believe I love you.”

“What was that?” Tori asked, even though she’d heard it perfectly the first time. She loved it when Holly said those three words, even when she was in a grump like this morning. It was still fresh enough to be novel, still gave her a thrill every time, even after three months.

Holly loved her: the hairs on her arm stood on end as she thought it. Yep, the rush was still there.

Tori reached out and ran her hand up the back of Holly’s neck, her short hair soft to the touch. The nape of Holly’s neck was a favourite spot for both of them.

“What was that you said?” Tori repeated. “You’re going to have to speak up so the whole carriage can hear.”

She waited for Holly to react. Three, two, one…

Holly lifted her head and gave her girlfriend a look. “You do realise 6.30am is far too early for humour, don’t you?”

“You know, there were even earlier planes — ours doesn’t take off till nine. And you accuse me of being dramatic.”

“You are dramatic. Usually the most dramatic of all. So I’m allowed to assume the mantle every now and again.”

Tori reached over and grabbed Holly’s pale white cheek, giving it a squeeze. Her eyes were bloodshot from lack of sleep, but her hair was styled to perfection. It might be early, but some things in Holly’s regime were non-negotiable. No matter what, if they were out of the house, she could count on Holly’s hair and dress sense being immaculate.

“You are, babe,” she replied. “Now go back to sleep and I’ll wake you at Gatwick.”

Holly harrumphed, but settled her head in the crook of her elbow and closed her eyes.

Tori sat back, glancing around the carriage. She opened her bag, checking her passport was still there. It was.

Opposite them, two more travellers in their 20s had rucksacks stuffed under their table, and were also slumped forward in protest at such an early start. Behind them, suitcases rattled on the luggage rack, ready and waiting to transport their owners to other parts of the globe.

Tori loved everything about travel — she loved the journey as much as the holiday. Trains held adventure, airports were gateways to your dreams, road trips were ripe with romance and drama. Having put up with Holly this morning, she was beginning to see her girlfriend didn’t think that way. Despite being friends since the age of eleven, they’d never been away together on anything more than trips within the UK, never anything that had involved planes and an early morning start. So far, she’d learned that waking Holly up early didn’t produce the best results.

And now they were off to Rome, the Eternal City, and Tori couldn’t wait. She’d always wanted to go, but her ex, Anna, had been too many times, so refused to go again. Luckily, Holly hadn’t been, so they were going to experience it together, for the first time, and Tori had spent the last week scouring the guidebook, which was currently nestled in her backpack. She’d mapped out a plan to see as much of the city as she could in the four days they had, but she hoped Holly perked up soon. Otherwise, she might be forced to clout her over the head with said guidebook.

They’d been waiting to get away on this trip since the start of the year, and Tori was determined to make the most of every second.

It was a full flight, with everyone jockeying for space to fit their suitcases into the overhead lockers. Luckily, the one above Tori and Holly’s seat still had room. Tori sat by the window, her face brimming with excitement, while Holly stowed her suitcase before sitting next to her with a thud. Holly willed the seat beside her to stay free, so she could spread out on the flight. Her wish did not come true.

However, the woman who did sit down twigged Holly’s gaydar in a major way. Holly knew the signs: hands in pockets, short fingernails, a certain lesbian air. The woman had long, dark hair as glossy as wet varnish, was about their age — late 20s — and smelt of confidence. And so slim — she probably existed on a diet of dust and alfalfa sprouts.

If someone had to sit next to Holly for the entire journey, it could have been a lot worse.

The woman smiled as she sat down, before getting out a copy of that morning’s Metro and turning directly to the crossword. She reached into her handbag and produced an expensive shiny silver pen, then settled back into her seat.

Holly nudged Tori with her shoulder, before angling her head subtly towards the woman.

Tori, attuned to Holly’s non-verbal signals after years of friendship, turned her head so she could see. When she clocked the woman, she turned to Holly and smiled.

“She’s family, right?” Holly’s voice was at a low whisper.

Tori nodded in reply, her expression telling Holly she was in no doubt the woman played for their team.

“Course, look at the chunky watch,” Tori whispered, nodding towards it.

Of course, the chunky watch. Another dead giveaway.

Holly dozed through the safety demonstration and take off, waking up when a new smell hit her nose: curry. She wrinkled her nose. It might not be too early for a beer, but it was definitely too early for curry, wasn’t it?

Still, within half an hour the air was filled with competing sounds and smells, including bacon sandwiches, body odour and crying children. Holly gave up trying to sleep and instead glanced over at her neighbour, who was still doing her crossword. Holly read a few clues, before extending her finger and pointing at four down.

“Southampton,” she told the woman. “Four down is Southampton — they play at St Mary’s. I’m a Saints fan.”

The woman counted out the letters, then filled in the squares, before giving Holly a smile.

“Thanks, I would never have got that, football isn’t my strong point.” She held out a hand to Holly. “I’m Cara, by the way.”