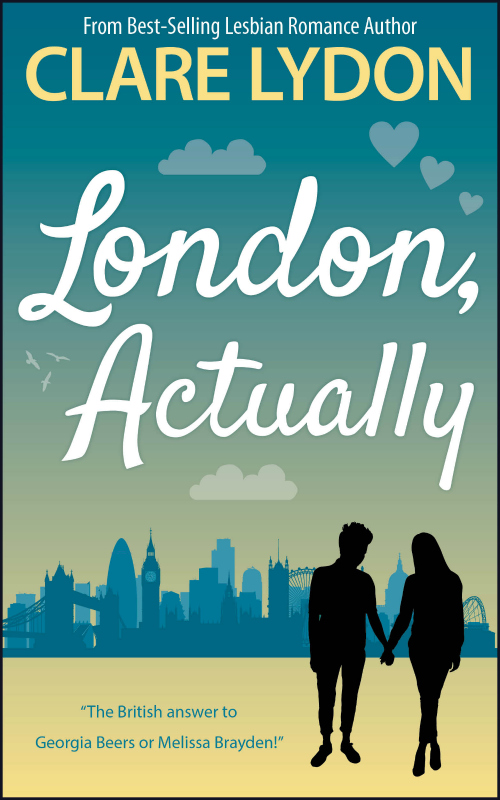 London, Actually is due out on October 24th – yay! In the run-up, here’s the first chapter to get you in the mood for book five in the London Romance series. A fresh slice of lesbian romance at its finest is coming your way very soon. I hope you enjoy this sneak-peek!

If Cleo Nightingale had to list her biggest irritants, her top three would be a slam dunk. In no particular order:

1 – Weddings.
2 – Her brother, Duncan.
3 – Saturdays that involved number one and number two.

Saturdays like today.
She rapped her knuckle on the door of his bedroom three times and waited for a response. Strictly speaking, it was her spare room and not his bedroom. For the moment, though, it was Duncan’s — ever since Michelle had turfed him out.
No answer.
She knocked again. “Duncan.” Her tone was getting irritated.
“Just go without me!” he shouted through the wood. “Why would I want to go to a fucking wedding when I know relationships don’t work, anyway?” The door opened and Duncan peered out, his eyes bloodshot, his face pale, his dark hair sticking up at all angles. He looked like someone who’d drunk two bottles of wine the previous night, and perhaps a bit of whisky on top.
Mainly because he had.
“You know what I should do?”
She took a step back when she smelt his breath, a heady mix of spite and battery acid.
“Do enlighten me,” Cleo said, waiting for her brother’s words of wisdom. This should be good; she could see his face souring as he composed the words in his head.
“I should turn up at the door of the church with a banner saying ‘Don’t do it, it’s all a bloody con’. Bang on the glass like Dustin Hoffman in The Graduate.”
“They’re getting married in a hotel.” She tried not to smile too wide. “Look. I get it — I really do. Having your wife leave you sucks. You’re preaching to the choir. However, we’ve told Fionn we’re going to this wedding, and seeing as she’s one of our oldest and dearest friends, don’t you think we should? Even if you don’t want to go, do it for me. You’re crashing in my spare room, eating my food and drinking my wine, so think of it as doing something in return. Plus, Mum and Dad are going, so they’re going to expect us to be there, too.”
He winced. “Facing Mum and Dad is not top of my to-do list when my life is up shit creek.”
She sucked on the inside of her cheek, leaning on the hallway wall. He was acting like the baby she so vividly remembered crashing into her life when she was five years old, and then weeing in her Polly Pocket when he was old enough to walk.
“You know what I mean. I’m saying that I want to go today, and you’re my plus one. I’ve been to enough weddings solo, and I’d prefer to have you as my escort.” She raked a hand through her still-knotty hair. “So for me, please. Jump in the shower, iron your shirt and be my knight in shining armour.”
“You’re not normally fond of knights in shining armour.”
“I’m all for them, so long as I don’t have to sleep with them.”
Duncan sighed, folding his arms across his chest and blowing a raspberry. “Okay, you win. I’ll get showered and polish my suit of armour. I’ll need it to ward off the evil spirits of marriage.”
She leaned over and kissed his cheek. “Thanks.” She pulled back before he could breathe his angry dragon breath anywhere near her. “And while you’re in the shower, try to think happy thoughts. I want a smiling Duncan by my side, not a snarly one.”
“I’ll see what I can do,” he said, standing up straight and yawning as he spoke, arms stretched over his head. “But tell me, why are you so bloody keen to go to a wedding? Marriage has hardly been kind to you, either, Mrs Divorced Before You’re 40.”
Cleo flinched; she knew she wasn’t special, just another statistic, but when he put it like that it sounded so much worse. For today, though, she was determined not to think about herself and just be happy for Fionn. Because who knew, maybe it would work out for her? Maybe she would be one of the lucky ones, the ones who beamed when they spoke about their partners.
It wasn’t something that had happened to her, nor lately, to her brother.
“Let’s just say it’s not so much the marriage, more seeing everyone again — all Fionn’s family and friends. Plus, it’s food I don’t have to cook and wine I don’t have to buy, so it gets a thumbs-up from me.”