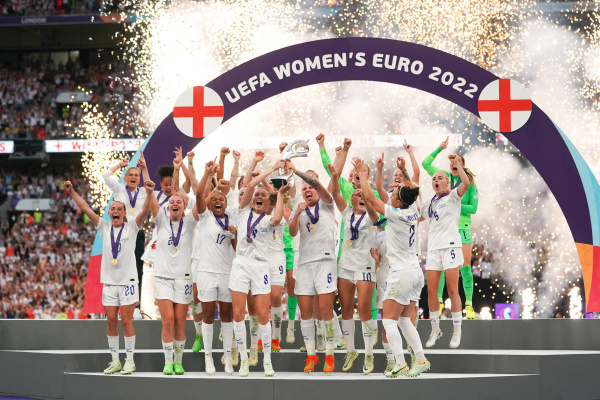 The Lionesses winning the European Championships was a huge inspiration to me. How will it inspire you?

This week, football came home. The England Women’s team beat eight-time winners Germany to take the crown, the first major footballing honour for our country since 1966. Even writing that gives me goosebumps. My wife and I bought tickets to the final ages ago, hoping England would make it. Not only did we make it, we only went and won it. I swear, I haven’t stopped smiling all week.

I’m a lifelong football fan: Spurs through and through. When I was little, I played with the boys on the school field, and my friend Sam and I were the first girls to play for the school team proper. But when I left primary school, I was told football wasn’t for girls.

I was never going to be a professional, but I was barred from playing even for fun. Full stop. No matter that I loved the game, I had to play netball instead. I hated netball. How many others who were far better at football than me had their ambition thwarted, too? How many honours have we missed out on? We’ll never know.

All of which meant seeing The Lionesses sweep to victory and lift a major European honour filled me with pure, unfiltered joy. I’m still tingling days later. These women believed they could. They had a plan, they were fearless and played scintillating football, and they succeeded in spite of a system that still doesn’t support them fully. Inspirational doesn’t even cover it. The Lionesses changed the course of history, and in doing so, they made me think.

Am I fearless enough in my day to day life and work? Do I challenge the status quo with my writing? Am I taking risks and trying to change the course of my history? These women dared to dream, and their dreams were big. They weren’t going to settle for average. Nobody should. They reminded me to do the best I can possibly do in my life. To work hard, be consistent, and keep going, no matter what.

It also made me want to kick a ball about again. I grew up wanting to be Steve Perryman or Glenn Hoddle. Now, little girls can grow up wanting to emulate female footballing role models. Who wouldn’t want to be the next Beth Mead or Lucy Bronze? They look like they’re having a ball.

I hope things change for this generation of girls. I hope if my nieces want to play football, they can. The weight of fragile male ego and history still weighs heavy on UK women’s football history, but I’m hoping for change. The Lionesses deserve it. In honour of their fantastic achievement, I’m going to emulate them and raise my writing game. Dream big. Shoot for the moon. As for my footy game? Look out for me on a patch of local grass soon…