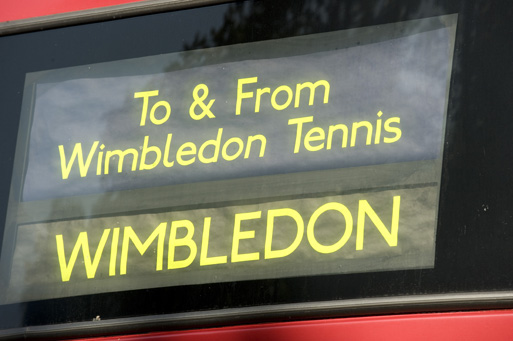 We’re now well into the first week of Wimbleton Abbey, and my, the script is way more fast-moving this year. Federer and Nadal have been consigned to the has-beens bin, Tsonga has a hurty knee and oodles of others who nobody’s heard of have slipped out of the tournament on their shoulder, arse or knee, pouting as they go. So where does this leave us? Murray and Robson to win either side of the tournament of course. Yay for media patriotism! Yes, we may have learnt nothing from previous years of hyping up our home players, but here are some things we have learnt this year…

1 – Grass is slippy. Go figure. Anybody who’s ever stepped foot onto a playing field can tell you that. So stop complaining tennis prima-donnas – yes, we’re looking at you Maria. These Wimbledon wimps should take a leaf out of the modern-day footballers’ book and celebrate each point by sliding on their knees over the grass, with a lil’ fist-pump for good measure. Make the groundstaff earn their money.

2 – Roger Federer is getting old. Mr Suave has been great for tennis over the past decade, playing some superlative stuff throughout. But am I the only one who’s a bit bored of his winning schtick? Yes, yes, we know you can play Roger. But I can’t be the only one who did a little cheer when I heard he’d been bumped off on Wednesday. Le Swiss, your time is nearly up.

3 – British tennis players need to go to personality school. Andy Murray: yes, we all know he’s got gigantic muscles and unfortunate brillopad hair, but really. C’mon! What about a smile Andy? Some intonation when you speak? It’s not hard. And now Laura Robson’s in on the act. During her interview after beating the No.10 seed on day two she looked dead behind the eyes, like a cardboard cut-out of herself. I thought it was difficult to make Murray look interesting, but she made it happen. Someone give that girl a Red Bull shake!

4 – What’s with the pink towels? In 2013, it turns out that some design wizard had an issue with the old Wimbledon towels. You can see the meeting now. “So this year, we need like, zazzy towels, yeah? I’m thinking towels with va-va-voom, towels that sing Wimbledon.” Design wizard clicks fingers. “I goddit! How about, we have purple and green towels?” Nods all round. Purple and green – great thinking. “And then for the women, who are like, women, we add a touch of… Pink!””Pink! I love it! And it goes so well with purple and green!” Someone please shoot this design wizard and take us back to the Robinson’s orange squash era, thanks.

5 – Tim Henman and John McEnroe are genius. Radio Five Live hosts a show called Six Love Six during Wimbledon and I LOVE it. It pairs the blundering, American bullishness of the Mighty Mac with the blundering English politeness of Henman and is hilarious as listeners ring in with vague tennis queries and Mac sets them straight, while Tim does verbal acrobatics to stay on the right side of the law. When gay marriage is finally made legal, I would like John and Tim to throw off any other relationships they might have, get hitched and then let cameras follow their every move. The sex would be hilarious.

6 – Hawkeye is awesome. You know, the tennis has been OK so far. Forehand, drop-shot, lob, volley. Yar-di-yar-da. But the real star of the show is Hawkeye. When a player challenges, it steps up, the crowd holds it breath and then the VT rolls, the ball’s shadow dives and gasps are emitted all round the court no matter what the outcome. Let’s just do that after every shot, it’d make it far more exciting.

7 – 2013 is the Year Of The Arse. The ladies’ skirts are getting shorter and the men’s shorts are getting tighter. All of this points to this year’s tournament being arse-centric, which is no bad thing in our book so long as it’s across the board. Wimbledon arses, we salute you.