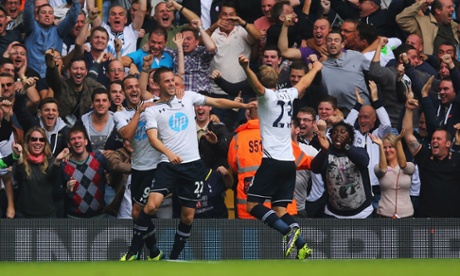 On Saturday, I went to watch the London derby of Spurs vs Chelsea in a bar – and since I could drum up no interest from anyone else I was with, I went alone. Apparently this is still a shocking turn of events for some men whose eyes seemed to spin in their sockets at the sight of a woman solo in a pub, even though I checked my calendar and we are indeed living in the year 2013…

When I arrived at the pub all the tables were taken but there was a vacant stool halfway along the bar – perfect. I ordered a beer from a barmaid with blackened teeth and greasy hair then focused my attention on the football. The second half was about to kick off and Spurs were up 1-0.

But no matter that I was focusing my attention on the football – time and again when I tuned back into the bar, I clocked men gawping at me. The young one in the red t-shirt by the wall. The older, more weathered pair at the far end of the bar. The cockney wideboy in stonewash jeans near the big screen. But I’m a big girl, I can take it. I simply watched more football, drained my beer, ordered another.

On the pitch, Spurs weren’t doing that well. John Terry – who else? – equalised after 20 minutes to make it 1-1 and despite having Torres sent off with ten minutes to go, we couldn’t make our advantage count and had to settle for a point. The players shook hands and I turned my attention to my half-full bottle of beer.

“Enjoy the game?” came a voice to my right, so I turned to respond. A blond-haired, blue-shirted man stood next to me grinning eagerly. I rolled my eyes in response.

“You’re a Spurs fan?” he asked, more than a speck of incredulity in his voice. I nodded.

“Been a member there for over ten years. Go to the home games when I can.”

“I don’t like to see a woman on her own in a bar so I thought I’d come and say hi,” he replied. “Greg.” He held out his hand and I shook it, taking in his words.

“I know, you just don’t see it very often that’s all. Women on their own in bars I mean. It’s weird.” It appeared I’d upset Greg by my very presence.

Greg and I chatted for a few more minutes, him offering to buy me a drink and looking slightly put out when I declined. He told me he was an overseas miner and that he’d eaten dinner alone last night. I told him I had to get back. We shook hands when I left and I made my way home, back to my house and my fiancee, somewhat aggrieved to realise I’d been chased out of the pub.

Well-meaning as Greg was – he’d probably just read the male version of The Rules or something – the fact that I couldn’t watch a game alone without attracting male attention depressed me somewhat. It also probably explains why men don’t see more women alone, enjoying a drink and watching the game just as they do everyday without a care. Sometimes, it’s just not worth the looks or the hassle.