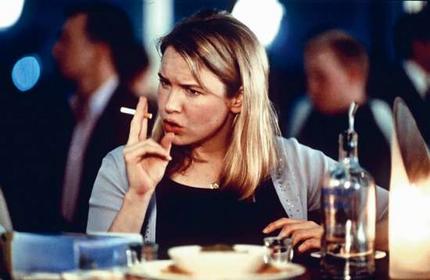 Strictly speaking, I was never Bridget Jones. For instance, I’ve never owned a pair of sucky-in pants and looking back at photos of me in the mid-90s it might have been wise. I’ve also never pined after a lawyer, never slid down a fireman’s pole (fnar), never dosed up on self-help books, never had a bonkers mother. But there were (are) parts of me that are a teeny bit Bridget and always will be, which is why I’m more than a tad excited by her imminent return – as well as being thrilled that the insipidly wet Mr Darcy has carked it…

You see, I say I wasn’t Bridget in the 90s and mostly, I really wasn’t. I was almost ten years younger for starters. I liked girls. I drank pints. I knew every Steps dance routine. I didn’t own an answerphone. But also in the 90s I worked in magazines, quaffed far too much Chardonnay, had a gay best friend and regularly burnt toast. So you see, a little bit Bridget. Ultimately, our similarities (along with my hopeless cheesy love story affliction) overcame our differences and Bridget became a heroine for hers and my generation, her story reflecting all our lives in literary form. Food, wine, lovers, work – how were we expected to do it all with grace and style? The answer was, we couldn’t so we didn’t – but we had some laughs trying. The books were hysterical and amazingly the films weren’t terrible, Renee Zellwegger eating enough donuts to do her porky English girl with aplomb.

And now as the years have marched on, apparently Bridget is about to pitch up in Helen Fielding’s new book as a widow with two kids sired by Mr Darcy. Still boozing (cocktails now, not Chardy), still obsessing about her weight, still self-helping her way through life but this time with the added bonus of small people and nit scares.

Bridget’s life back then told the story of what it was like to survive in the London media set in the mid-90s, a land before Facebook and Twitter, before cronuts and Negronis. When Bridget first hit our senses we read her from a book, not a Kindle and mobiles were used for phone calls and nothing else. Imagine. Cut to the present and I’m sure Bridget now spends her days obsessing about her blog/Facebook/Twitter as well as loling at videos of cats and babies eating limes. I can’t wait to get reacquainted with her, crack open the Chardy and see how my life squares up 20 years on.