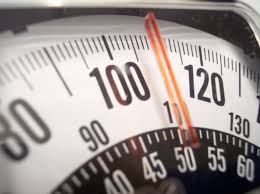 I’ve just finished watching last night’s documentary Welcome To The World Of Weight Loss, which followed a smattering of women and one lone man on their quest to drop the pounds. As someone who’s spent my life sparring with excess lard, it was interesting to watch their journeys and work out whether or not the various weight loss plans were actually working…

The programme followed disciples of WeightWatchers, Slimming World and Rosemary Conley, but no matter which regime you chose to follow, they all danced (OK, shuffled slowly) to similar tunes. First, meet in a drafty church hall. Second, sit on scuffed orange plastic chairs. Third, get preached at by a patronising host who used to be fat but is now not as fat as you. Finally, weigh yourself in front of complete strangers and get clapped if you’ve lost weight or get frowned at for eating too many Smarties.

Now I’ve had many battles with my weight, some of which I’ve won and some of which have left me bloodied, bruised and a bit fat. But I’ve never turned up at a church hall clutching my dignity in my sweaty palms and put my faith in the power of the group and an evangelical leader – it all just seems a bit too goddy for me. I did follow my sister’s WeightWatchers plan when I was 14 – my first foray into dieting – and succeeded in losing two stone which really annoyed her as she lost none. It was easy back then you see, I didn’t go all gooey-eyed over pints of lager back then.

The documentary shone a light on the reasons behind the weight gain and some were truly tragic. For one young woman, the thrice weekly diet classes were her only jaunt beyond her front doors (bar the supermarket) due to a chronic case of body dysmorphia. Another had slimmed down from 23st to almost 11st and gave the credit purely to god. Another woman saw a picture of herself in a Stella McCartney swimsuit on holiday and wanted to change it. From all walks of life they came with one defining goal: to get slimmer.

These groups clearly do provide support, plans and guidance and as this programme showed, they work if you stick to them. But there’s the rub – most people don’t. If you haven’t seen it yet, catch it on iPlayer and I dare you not to cheer for the sisters who follow up every weigh-in with a junk food blowout, their motto clearly being ‘eat dust, then doughnuts.’ At least it’s a balanced diet.