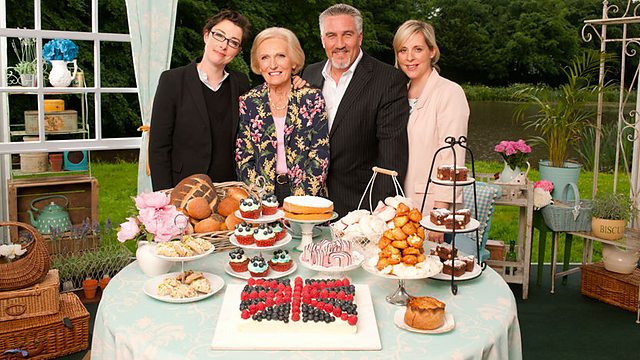 Tonight is episode two of the Great British Bake Off and the excitement around the country is palpable. Step outside my front door and I can see buses gliding along roads, Iceland full of shoppers, dogs being walked on taut leashes. Of course, this is all about killing time in between episodes. We have to keep up a facade that life goes on as normal but this is a MASSIVE LIE. The fact is that now the Great British Bake Off is back on our screens, life is built around it until we find out who, out of all the hopefuls in the big tent, bakes the bestest cake…

I have to admit, I was a GBBO sceptic at first. All around me, people were consumed with room temperature butter, the right eggs, folding flour not just mixing. Honestly, who does that? I assumed this was a show for my friends with kids for whom baking had crept into their lives out of necessity, or for some of my more creative mates for whom baking has always been a prerequisite. But then the unthinkable happened – I began to bake.

It started off subtly – a banana cake here, a fairy cake there. But soon, things turned sinister. Before I knew it I’d whipped up a lemon drizzle, a rhubard & custard cake, some carrot cake muffins, accompanying them with words like “So easy!” and “Made in minutes!” The signs were there, friends started muttering about the change and suddenly, I was propelled into a bake shop and was buying measuring cups. There was no going back.

But still, I didn’t see the value in the Great British Bake Off. I mean, watching a bunch of people in a tent baking cakes – it’s hardly a thrill a minute is it? But having started baking, I understood the precision involved, knew the potential for failure, knew the heartache of a flat sponge. So last year, I took a peek – what can I say, it was a moment of weakness. And that was the end of that.

Soon, I too was involved in the bakers’ lives – would slightly creepy Brendan win? Would John conquer his nerves? Would that bloke who insisted on making bicycle spokes out of bread triumph? And where exactly were the female bakers? It helped that it had Mel & Sue as hosts to pierce the tension and I was a fan of the fact that one of judges looked like she’d been lifted straight from the WI tea tent. Last year, I only caught the action from the semi-final onwards, but I got the gist – this was not just about baking, this was people’s lives floating in a river of tempered chocolate.

This year though, I have no excuses. I knew what I was getting into and I’m an active participant, in from the starting gun. My partner moaned at me when I told her I was watching: “Really? The whole way through?” Yet there she was on the sofa next to me, a rapt look on her face as eggs were cracked, butter creamed, cakes watched. What the GBBO provides you see, as well as chummy competition and tasty bakes, is a gutful of compulsive, soporific TV. It bucks the trend of most reality TV shows, in that the judges aren’t nasty and the competitors aren’t ridiculed – the only person who can shoot them down is themselves and their baking skills, just like Toby did in week one when he mistook salt for sugar. Oh dear.

The Great British Bake Off is a TV lullaby then, with lashings of yummy cake at the end. It lives and dies by the Keep Calm And Bake On ethos and is like lunch with the Famous Five on our TV screens every single week. The only thing they could possibly do to improve it is deliver a slice of each cake to every viewer as Mary Berry and Paul Hollywood are scoffing them down. Look lively BBC…