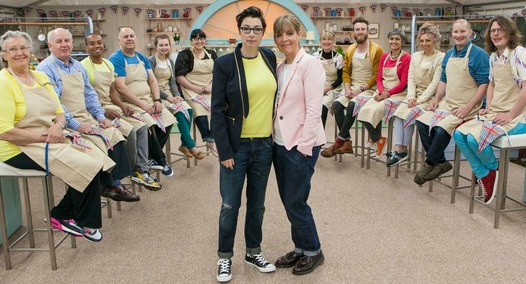 So here we are again, back in the tent, back watching people staring frantically into ovens. Yes, the Great British Bake Off is currently mid-run on our screens and after last week’s bingate scandal, things are only going to get hotter under the collar tonight. Because later, it’s time to join Paul & Mary and Mel & Sue for pies and tarts week. So many puns, so little time…

So what have we learnt this year that we didn’t know last year about the show? First, that there’s still a healthy plethora of the weird and wonderful among the nation’s bakers. Of those already culled, I was particularly sad to see the back of ponytail-fancier Jordan Cox, the baking-mad IT manager with a healthy dollop of misplaced self-belief.

Last week also saw the exit of everybody’s favourite beard-wearer, the marvellously stroppy Iain Watters. This was sad because I was fully expecting Iain to produce a bake  from his thatch for a showstopper one week – so by binning his baked alaska, he ruined my dreams as well as his own. Selfish Iain, selfish.

Favourite to go tonight is surely Norman, who was heading out the door last week until Iain threw his ice-cream-flavoured wobbler. And this despite the fact that I dearly loved Norman tasting his own vanilla ice cream last week and declaring himself “born Italian!”

So who’s in contention to win this year’s title? Well the bookie’s favourite is builder Richard, who’s already bagged two Star Baker crowns this series. However, his habit of baking with a pen behind his ear is irksome. I’ve taken a shine to the absurdly young and cheery Martha, the jaunty Kate and the adventurous Luis, which surely means that none of them will win.

However, the real winner of the series is baking and of course, Mary Berry’s wardrobe. Seriously, the woman can rock a pair of jeans like no other 79-year-old I know – and did you catch her Hermes belt last week? Mary brings it every week, along with the bakers who all sing us a gentle lullably with their mixing, whipping and piping. Matron, I’m ready for my next shot of GBBO…

Like this? Read more in my Food & Drink section.

Subscribe to this blog and never miss another post! Sign up with your email address in the box on the right, or if you’re on a mobile, scroll to the end to do the same. Easy as.