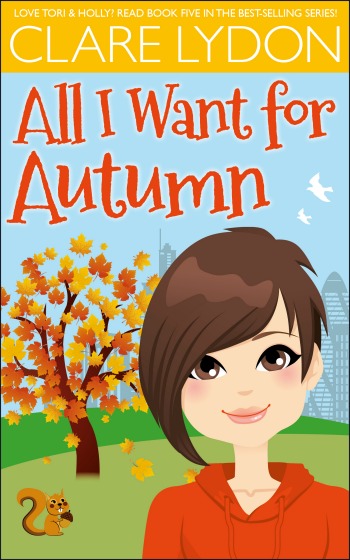 The next instalment in the saga of Tori & Holly – All I Want For Autumn – is due out on Sept 21st. Yay! I have to say, I got a bit emotional writing this one, the penultimate book in the series. If you’ve been following this lesbian romance series and are on tenterhooks wondering what happens next, here’s a sneak peak at the first chapter…

All I Want For Autumn: Chapter One

Holly opened her eyelids wearily: where was she? She heard voices, saw hazy shapes, then she let her eyelids flicker shut. Everything hurt. Everything. She tried opening her eyes again, but the ache inside her head was immense, and there was a buzzing in her brain. Her tongue felt the size of an ocean liner, her teeth icebergs it kept crashing into. Everything was so heavy, and the pain was strobing from her calves to her eyeballs; shocks of pain so frequent, she thought she might pass out. Why was she hurting so much?
There were voices now, urgent and barking. A siren, making her head hurt even more. She was trying to piece things together, but nothing made sense: all she knew was she’d never felt this much pain in her entire life.
“Holly? Can you hear me, Holly?”
It wasn’t a voice she recognised, but it sounded in control. The voice was a glassy lake, cool against her skin.
Holly went to answer, to move her head, but nothing happened. Why couldn’t she move her head?
“Can you hear me, Holly?”
She tried again. Still nothing.
Oh sweet baby Jesus, was she paralysed? Fucking hell, she’d cry if she was. She tried to wriggle her toes but couldn’t get anything to move. There was just pain, and nothing else. Pain all over her, like a sheet of corrugated iron crushing her into the ground.
“Holly? If you can’t speak or move your head, just blink for me.”
Just blink. Surely she could do that? If she couldn’t, she was in trouble.
Deep trouble.
A darkness swirled above her. Keep it together and blink. She herded her thoughts and with all her might, she managed to blink.
At least, she thought she had. Had it worked?
“Good, you did it,” said the voice.
Holly’s mouth didn’t feel like her own. All she could taste was blood, coating every inch of her tooth enamel, thick, curdling.
Then there was a hand on her arm: she could feel that.
“Don’t try to speak now, Holly,” said the voice, still strong, calm. “You’ve been in an accident. We’re going to put you onto this scoop stretcher before we lift you onto something more stable, and then we’re going to get you into the ambulance and to the hospital, okay?”
Holly’s brain clouded over again, like a typical British summer’s day. Then something was being slid under her, and there was a snapping sound. She hoped that was the stretcher and not any part of her body. Then she felt her leg move and all manner of pain alarms triggered inside her brain. She went to cry out, but again, nothing happened. She must have made some sound though, because somebody squeezed her hand.
“You’re doing really well, babe.” Tori! A voice she recognised, mixed in with the seething, writhing hurt.
Holly went to respond, but the clouds returned.
“Once we get you in the ambulance, we’ll give you something for the pain,” said the voice.
Pain relief sounded better than a five-course menu in a Michelin-starred restaurant right now.
“On three: one, two, three…”
She was on the move and if she thought she’d been in pain before, it was nothing compared to that brief moment. A blinding shard of hurt rappelled through her body, slicing all the way down, then all the way back up.
She heard a noise, a groaning. Was that her?
And then, there was nothing.

All I Want For Autumn, book 5 in the All I Want series, is due out on September 21st!