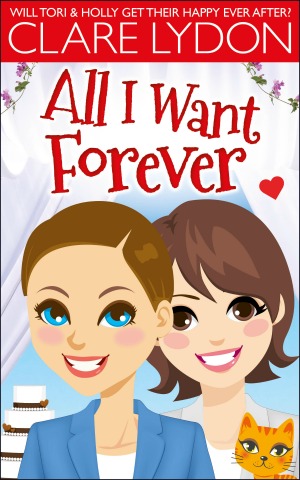 My brand-new novel and the final instalment in the All I Want lesbian romance series – All I Want Forever – is due out on January 27th and I couldn’t be more excited! Tori and Holly have been with me for over a year now, and writing the final scene was brilliant and emotional, as I bid a fond farewell to London’s favourite lesbian couple. At the end of All I Want For Autumn, they were newly engaged, Tori headed for San Francisco, while Holly was jobless. Want to get a taste for what happens next by reading the first chapter of All I Want Forever? Read on…

“To the left. Nope, a bit higher.” Trudi took a step back. “Actually, could you move a bit to the right?”
“I’m on a ladder,” Tori replied. “And my arm is about to drop off.” Trudi was taking this far too seriously and it was Friday afternoon, nearly Friday evening. Surely they should be thinking about going home soon and slating the boss?
Only, Trudi was Tori’s boss now, and they shared a flat, so that idea was a non-starter.
“What do you think? She’s your girlfriend, after all.” Trudi was referring to the enormous poster of Holly’s face that Tori was currently holding a corner of. They were in a local bar, measuring up to hang the promo posters for Babe Magnet  — and the promo posters were, basically, Holly.
“She looks gorgeous whichever way you hang it.”
“You’re a bit biased.”
“Ask a silly question.”
“You’re right, though, she does look cool — when’s she coming over?”
“Four weeks and I can’t wait.” And Tori couldn’t. They’d only been apart two weeks, but seeing as Holly had proposed the day before she left, it felt way longer. Tori already knew the next four weeks were only going to follow the same pattern: hollow days bereft of love, but filled with busyness.
“Go left.”
“Seriously?”
“Yes,” Trudi replied. “Up a bit.” She clutched her chin as she peered up one of Holly’s giant nasal cavaties. “You know, your girlfriend has very smooth nostrils up close. Either that or the retoucher did a great job.” She paused. “Stop. Put a mark on the wall just there — you still have the pencil?”
“I do.”
“Then that’s perfect.”
Tori did as she was told, putting a faint pencil mark on the wall, before gingerly climbing down the ladder and rolling Holly up in a neat cylinder. Then she leaned against the polished wooden bar as Trudi hugged her.
“I’ve got a good feeling in my bones about this, you know. We’re going to put these launch posters of Holly up all over bars in the city to start, and then the Babe Magnet party is going to be the launch event to end them all.”
“I agree. I’ve seen the drinks allowance.”
Trudi nudged her. “It’s not just that. This is all our hard work, everything we’ve been working towards over the past year, all presented to the world to use. Babe Magnet is going to be the best lesbian dating app on the market.”
“Don’t forget the bisexuals, polysexuals, transsexuals, queers and undecideds.”
“As if I would. We’re inclusive, you know that.”

Trudi folded her arms as she shook her head. “Sometimes, I still pinch myself. We’re in San Francisco and we’re launching an app that Shauna and I thought up over breakfast last year.”
“Was it a power breakfast?” Tori knew the answer, but she thought she’d play along for her friend.
“No, it was a bowl of porridge!” Trudi replied. “And now, here we are.” She put an arm around Tori. “And I can’t wait for your girlfriend to arrive either — she’s going to be perfect as the face of Babe Magnet, and wait till the Americans hear her accent. They’ll swoon all over again.”
“She’s from Watford.”
“I know that, you know that, but the Americans will just see her face and hear her voice, then think she’s been sent from heaven. You do know you’re engaged to a superstar, don’t you?”

A sizzling hot superstar, Tori thought, remembering the sex they’d had the night before she left: their first as an engaged couple. “I do now,” she replied, her cheeks colouring as their intimate sex tape played in her mind.
Luckily, it was for her eyes only, and Tori was in no doubt she was exactly that: lucky.

All I Want Forever is due out on January 27th and will be available via Kindle, iBooks, Kobo, Bella Books, Barnes & Noble and most other digital outlets.