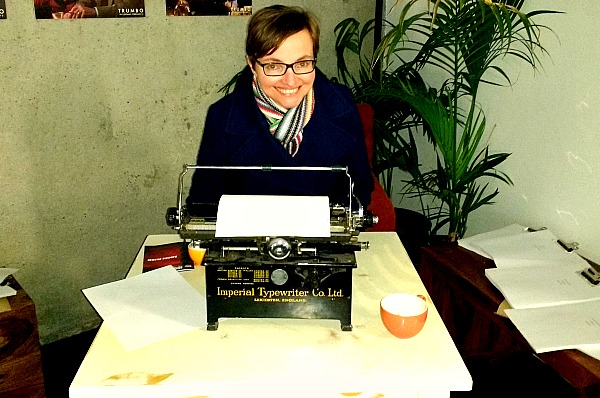 I began writing the story of Tori and Holly in July 2015. While everyone else was slapping on the factor 15 and jetting off to hotter climes, I was embarking on a Christmas book. However, writing a Christmas story in summer posed no difficulty at all, because like my main character Tori, I love Christmas – so bringing it forward a few months was a plus. When I used to work in an office, I’d always get told off for playing Christmas music way too early. Now, I have a job where playing Christmas tunes in July is perfectly acceptable. Win!

When I sat down, though, I had no idea what the story was going to be, who the characters were, what would happen. But when I started writing, Tori and Holly appeared and suddenly I knew this was going to be a friends-to-lovers story. And that first chapter just flew from my fingers and set up the premise – Tori was the scatty, flighty one, while Holly was the torch-bearer: dependable, tall, far more prone to suffering.

When I was thinking about writing their story, I heard from a friend about how awful her online dating experiences had been. I thought there might be something in that, so I began to write down some instances people had told me about, and ones that had happened to me.

Yes, I went on a date where the person tried to sell me an insurance plan within half an hour – we never had a second try. And yes, one of my friends did fall asleep on the loo on a first date, but the embellishments were all my own. After it was published, I received a deluge of emails from readers telling me they’d also fallen asleep on the toilet during a date. Unbeknown to me, I’d tapped into a common phenomenon!

All I Want For Christmas came out at the end of October 2015, and did a roaring trade straight out of the blocks. And the feedback was glowing, with people commenting on the humour – this book was more raw than the previous books, the humour more out there.

For that, I must credit my editor who pushed me to make those humorous scenes as cringe-worthy as possible. I followed the old adage that you should torture your characters, and it proved a solid rule to follow. I knew I wanted Tori to suffer before she realised the one for her had been under her nose all along.

And then everyone started to ask for more – what happened next? Even though I did write a bonus chapter for Tori & Holly, people wanted to know how they were doing – the characters had really struck a chord. And so, talking with friends, I struck on a plan: what if I followed these characters through the next stages of their relationship? What if I did a series of novellas checking in with them throughout the year, and then finished it off with another novel at the end? Could it work?

I decided to give it a try. And thus began the year of 2016, the year of Tori & Holly. I wrote their Valentine’s story, their first trip away to Europe, their experience of Brighton Pride. I chronicled their arguments, their sex, their growth, their triumphs.

Finally, when the ultimate obstacle was thrown in their way, I wrote how they navigated it and just what they were prepared to do and give up to stay together. I always knew Tori and Holly would have a happy ending – heck, the story is a lesbian romance first and foremost – but I wanted to make it relatable, real, believable. I hope I achieved it.

Following their journey and writing them throughout the year was at times challenging because I’d never written a series before, let alone one that dealt with the same couple. Conventional writing wisdom tells you not to do this, as it’s harder for you and readers might get bored reading about the same characters.

I can certainly relate to it being a challenge, but it was also something I was happy to take a crack at – and I think my writing grew alongside Tori and Holly. Like writing a book, the middle of the series was where I stuttered a little, throwing away the first draft of All I Want For Summer and starting again.

My second try worked well though, and I loved writing All I Want For Autumn and All I Want Forever, the latter flowing from my fingers as it took three months from start to publication, my quickest turnaround yet for a full-length novel. The reason? Because I knew these characters better than some of my best friends: their dreams, desires and demons. And I knew where I wanted the book to end up, so then it was just a case of working out the finer details.

Writing that final book was emotional as I realised I’d have to say goodbye to Tori and Holly for good, but I was also happy to leave them where I did. I’ve loved watching them flourish, but now it’s time to move onto the next books I want to write.

Farewell then, Tori and Holly. Sayonara to Trudi, Shauna, Melissa and Kerry. Toodle-pip to Nicola Sheen and Melanie. And a fond adios to Sarah, David and Elsie; to both mums and Tori’s gran; and of course, Valentine the ginger tomcat. It’s been some journey and I’ve learned so much about my writing and about myself. So much so, I’m confident it won’t be the last series I write – in fact, my next book will be book three of the London series, and then who knows, I might start a whole new one.