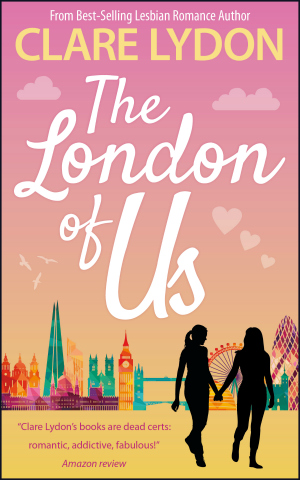 The fourth book in my London Romance series – The London Of Us – is out on June 27th, and I can’t wait to get this one out into the world having finished it at the end of March. It’s being held up so we can launch the audiobook, ebook and print all at the same time, so thanks for your patience with this one! To give you a taste, here’s the first chapter – more to come very soon!

The London Of Us – Chapter One

I’d had the dream again.

I woke in a flurry of hot sheets and damp skin, trying to ground myself back in reality, rather than my dreams which had become far too vivid recently.

Too late: my heart was banging against my sternum and all I could see was her.

I didn’t have to touch myself to know I was wet.

For the past three months, my dreams hadn’t held back, telling me everything I needed to know, everything I desperately wanted to ignore.

The sheets next to me were still warm: Jake was up and in the shower, already deep into his daily routine. But today, I had no plans, nowhere to be. It was the middle of July, and this particular Saturday was special because it was day one of the summer holidays, and six weeks with no teaching stretched ahead of me like a long, sandy beach, the sea my day, glittering with excitement. I could either dive in or sit on the edge. It was up to me.

The shower shut off.

I tensed as I heard the curtain being pulled back. In two minutes, Jake would be in here, being perky.

He was a morning person, and I was not.

Scrap that — Jake was a morning person, an afternoon person, and an evening person. Constantly upbeat, always ready with a smile. In the year and a half we’d been together, I could count his down days on one hand.

And even saying ‘down days’ was a lie.

Jake didn’t have down days: he just had marginally less upbeat days.

Unlike me, who was having a cluster of what-the-fuck days of late. On top of all that, I’d got a massive spot on the end of my nose that felt like it had doubled in size overnight. When I peered down, I could see it winking at me, my own face mocking me.

“Morning sleepyhead!” Jake walked into the bedroom from the en suite, steam following him from the doorway.

He never remembered to open the bathroom window.

He walked round the bed and bent to kiss me: I winced as our lips connected, but Jake didn’t notice. I was sure he’d be able to taste the hesitation on my breath, but he was oblivious — of the hesitation, and of my spot.

Jake never saw my bad points, only the good.

Lately, it was a habit that was starting to grate.

Seconds later, his head was buried in his wardrobe, and he was pulling out clean shorts and a workout top, slipping them on while I yawned.

Jake was a personal trainer, so this was his office wear. As his head reappeared out of his top, his curls sprang out, then back. His hair hadn’t changed since he was a kid – I’d seen the photos. He was cute then and he was cute now.

It’s just, I wasn’t sure Jake’s brand of cuteness worked for me anymore.

“Morning.” I finally managed to get some words out, before stretching my arms above my head, trying to appear relaxed, normal.

Inside, I was anything but.

“What time’s your first client?”

“Eight,” Jake replied, checking his watch. “So I better get moving. What are your plans till I come get you later?”

I stared at him, his biceps rippling under Lycra. When we’d first started going out, his strength had been one of the things I’d found attractive.

I shrugged. “Nothing big — I’m easing in slowly. Maybe some TV, some tea and crumpets.”

“Take it slow,” he said, with a grin. “Work up to the bigger goals.” He grabbed his work bag, striding over to me. He smelled like musk and honey, his favourite shower gel. “I’ve got clients till 11, but then I’ll come pick you up to go to Ikea.” He looked down at my book, watch and rings sitting on the thick, beige carpet. “It’s time for the next step in our relationship — proper, grown-up bedside tables with drawers and everything.”

He kissed me again, this time leaving his lips inches from mine.

I tried not to flinch, but even that action felt dishonest.

He really didn’t deserve any of this.

“You smell delicious,” he added, his smile undimmed, his gaze caressing my skin. “Shame I have to go.”

I reached out and touched his stubble, ever-present, along with his chestnut waves.

Beside me, my bedside lamp flickered, and Jake glanced at it.

I couldn’t wait. “Have a good morning.”

One that isn’t soaked in life questions and self-doubt.

He gave me a wink, then turned and left the room.

The front door slammed and I relaxed for the first time that morning. I spread my legs in the bed, then my arms, wriggling over to the middle, revelling in the space. It’s what I needed more than anything right now.

Space to breathe, space to think.

The school holidays had come at just the right time. Although too much time to think might send me into a tailspin, and I didn’t need that.

I wanted to scream at the universe, to ask what was happening to me.

Why couldn’t I just carry on with Jake and be happy? Plenty of women would be.

But deep down inside, I knew what was happening.

And her name was Rachel.

The London Of Us is out on June 27th. You can pre-order the book on iTunes, Kobo and Barnes & Noble. No pre-order on Kindle.