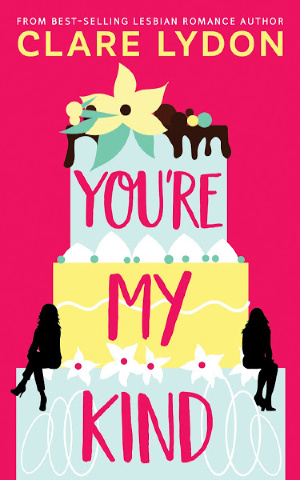 My next lesbian romance, You’re My Kind, is due out on March 21st. Three cheers for that! The cover (which I’m more than a little bit in love with) is shown above, and if you want to know more, here’s the blurb…

Would you give your first love a second chance?

Justine Thomas and Maddie Kind met at university and were the couple most likely. Everybody said so. That is, until Maddie left without saying goodbye.

Ten years later the pair are reunited at a friend’s funeral, and now Justine can’t shake Maddie from her life. But why is she back? Why did she disappear? And more importantly, is she interested in the whole cake, or just one last slice of Justine?

Strap in for a novel that deals with life’s big topics: love, death & cake. Clare Lydon is the queen of British romantic comedy, and this stellar lesbian romance is guaranteed to give you all the feels. It’s unputdownable.

You’re My Kind is the first of four new books due out from me in 2019. I hope you’re as excited as I am!