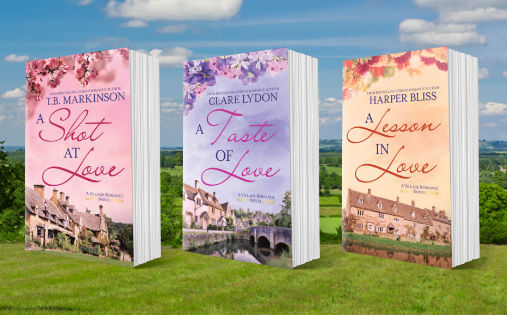 This summer, I’ve teamed up with best-selling lesfic authors TB Markinson and Harper Bliss to bring you a blockbuster lesbian romance trilogy. It’s got drama, heat, tension and so much English country charm, you’ll be speaking like the queen in no time. But how did the idea come about? Read on to find out more…

Being an author can be a lonely business. Because it basically involves you sitting in a room, and writing. So when you meet other authors who you get on with, it’s something of a eureka moment. I had that when I met TB Markinson and Harper Bliss. From day one, we all got on. When we met in person, we couldn’t stop laughing. But when we did, we dreamed up a plan to write a series together – and several months later, here it is.

I couldn’t be prouder of The Village Romance Series. It’s set in the fictional world of Upper Chewford, which is a mash-up of real-life Cotswold villages Bourton-on-the-Water, Burford, Lower Slaughter and Stow-on-the-Wold. Those tiny bridges in the book, the old mill, the quaint pubs – they all exist. But the characters, the laughs, the drama and the romance were all dreamed up by the three of us.

The Village Romance Series is three books written by three separate authors that share a common universe: Upper Chewford. Our characters all drink at the same pub and walk the same streets, but our books are standalone, too. However, to get the best view, read all three and see how the characters pop up in each book and all intertwine. Read one book to get one couple’s story. Read all three to get the whole village’s tales.

All you need to do is buy them today, then sit back, relax and be transported away to the Cotswolds with three authors whispering their tales in your ear. Hours of entertainment at your fingertips. Just a click away. Who needs Netflix?

The Village Romance Series is:

A Shot At Love by TB Markinson (Book One)

A Taste Of Love by Clare Lydon (Book Two)

A Lesson In Love by Harper Bliss (Book Three)