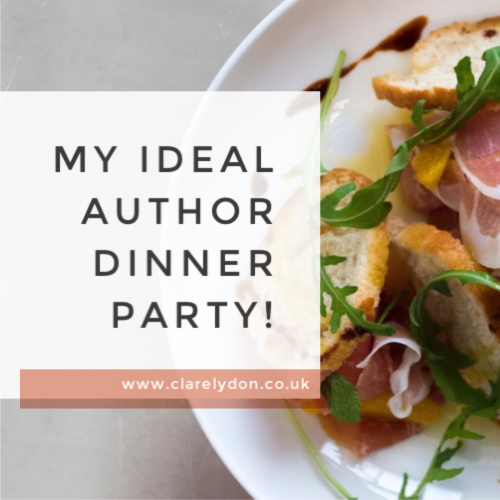 If you had the choice, which writers would you invite to your ideal dinner party? There are six places at my table, room for me and five authors. Your choice might be made because you love their writing, their sparkling wit, or just because you’ve always wanted to ask them, “What were you thinking ending your last book like that?!”  I decided on an all-female evening, because it’s my party and I can do what I like. Ready? Let’s lay the table and get going…

Back in the 1960/70s, lesbian romance novels weren’t really a thing. Mainly because lesbians were too busy fighting the patriarchy, and romance stories were considered way too heteronormative. Cut to 1983, and Katherine V Forrest, who’s generally regarded as writing the first ever lesbian romance novel with Curious Wine.

I’d love to invite Katherine to dinner to ask her what was going through her head when she was writing that book. It must have felt so daring and dangerous. What was it like publishing then? What difficulties did she face? Curious Wine flows so well, and still stands up nearly 40 years later. What’s more, it’s sold over 100,000 copies. It’s intense, romantic, and a bonafide classic. If you haven’t read it yet, you really should.

Drinks choice: Judging by her Curious Wine characters, possibly a whiskey? But I’d have the Campari & soda and gin & Dubonnet on standby. Just in case.

Any dinner party would be made better by the presence of Marian Keyes, becaues as well as being the god of writing, she also comes over as a total bloody riot. If you haven’t read her books, imagine you’ve become Irish, you like to ride and you’ve been plonked in some incredibly awkward/life-changing situations.

Keyes writes so realistically and with such humour, and her books leave you breathless. She writes about Ireland, she writes about issues (addiction, abortion, religion, parenting). But most importantly, she gets how real people speak and she understands how to bring life to the page. I’d want her at dinner so I could sit on her lap and perhaps steal a smidge of her genius when she’s eating the sticky toffee pudding. She’s sold 35m books too. I bet she’d stick her tongue out in a selfie.

Drinks choice: A sparkling water? Tizer if she’s feeling like a little va-va-voom.

I’d love to meet Judy because she wrote my teenage years with her books like Are You There God, It’s Me, Margaret?, and Forever. She understood exactly what I was thinking and feeling. Apart from part where I fancied girls. But you can’t have everything, can you? Judy was writing YA way before it was cool to do so. Did she invent the whole YA genre? I would lay bets.

In 2015, Judy penned her first adult novel in ages: In the Unlikely Event. It was set around real-life events in her childhood hometown and it was a sprawling, character-led epic. She writes characters like no other. They stick with you. I’ve got a terrible memory, yet I still recall some of those scenes and how they made me feel.

Judy has sold 85m copies of her books in 32 languages. Let that sink in. She’s in her 80s and still writing. I mean, I know. In her downtime, she works at a book store in Key West, as well as fighting a battle against censorship in fiction. She’s a bloody star-bar!

Drinks choice: I imagine she’s organic and possibly drinks biodynamic wine. With a side order of sunshine.

Book choice: In The Unlikely Event.

Has there been a better debut book in the world, ever, than Oranges Are Not The Only Fruit?  I can’t think of one. Since Jeanette burst onto the scene with it back in 1985, she’s consistently produced quality books bursting with poetic, funny writing. It’s not an easy skill, but she makes it look like that way.

Having seen her live a few times, I know she’d be a top dinner guest. She’s witty, erodite, and captivating when she speaks. Plus, she knows how to cook too, as her book Christmas Days reveals. In fact, Jeanette can bring dessert, no bother. Maybe Mrs Winterson’s mince pies?

Drinks choice: I’m plumping for a nice drop of red.

Book choice: Oranges Are Not The Only Fruit

This choice is an outlier, as I’ve never read one of her books. However, I’ve heard Bella interviewed a million times and she is a god of indie publishing. She has so much wisdom and chutzpah, plus she runs her own successful publishing company, designs her own covers and has sold millions of romance books. Every time I hear her speak, I learn something new. Imagine having her to dinner? My brain might literally explode!

Bella was a successful songwriter in Nashville before becoming a publishing juggernaut. She still lives there, but has a house in the UK, too – so this could happen!

Drinks choice: Champagne, dahlink. Or perhaps a Bud Light? I can’t judge it!

Book choice: As Long As I Have You: The London Sullivans

Clare Lydon’s latest book, Before You Say I Do, is out now!