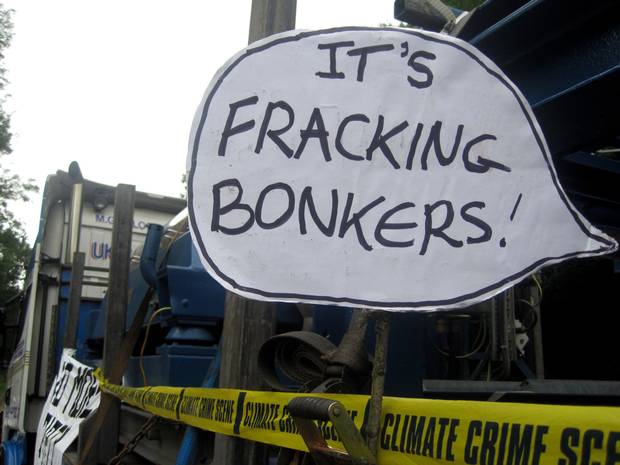 Recently, the news seems to be getting filled up with lots of stories about fracking. “What the frack is fracking?” a friend of mine asked recently. Good fracking question I thought. So I looked into it. After countless hours (approx) spent staring at scientificky computer screens, I have come up with the following…

Hydraulic fracturing – or fracking to its friends – is a byword for impatience. It’s when you pummel a toxic slosh of chemicals into the earth to shatter some natural rock to get natural gas quicker. It’s fast-food, drive-thru gas and bugger the long-term consequences.

During the process of fracking, methane gas and other gloop contaminate nearby groundwater, which isn’t ideal because methane gas is generally not something you want to be drinking.

Up to 50% of the toxic fluid that doesn’t invade the nearby drinking water then just stays in the ground as it has nowhere to go. The waste fluid left in open-air wells contaminates the air and causes acid rain. Will the badness never end?

The end result is that, yes, fracking means you get oodles of gas quickly, but with huge environmental, health & safety hazards attached.

Because it makes drinking water, rain and your local environement unsafe – and because it involves the forces of evil – fracking is bad.

The forces of evil should not be confused with the axis of evil. They are very different things, stupid.

Gas in itself is not bad, just the ways people get it. For instance, farting is natural gas and that is sometimes funny. Quite often when it is your own fart in fact.

If you would like to stare at scientificky screens too, try this one because it has cute animations and minimal scientifickyness: http://www.dangersoffracking.com/