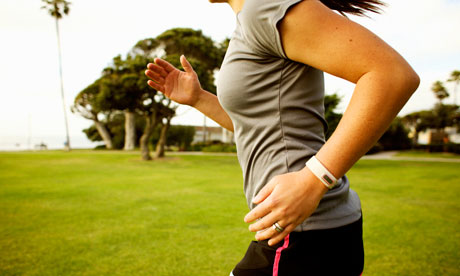 This week, I have mostly been running. Run, runny run. Granted, I found time to eat, sleep, watch a bit of Homes Under The Hammer in between. But mostly, running. For at least 40 minutes every day. Doesn’t sound that impressive now I write it down. But believe me, when you’re only ten minutes down and you feel like your kneecaps are about to split, 40 minutes is a long way…

I never thought I’d be a runner. I used to look at people running and goggle at their athletic prowess. Yes, even the ones that look like they’re going to have a heart attack. But then I decided to lose some weight, go to the gym, eat better. So I got on a treadmill.

At first though, I didn’t run. I told my trainer in no uncertain terms that I was not a runner. “I don’t run,” I said, looking grave. “Fine,” he said, “you can walk uphill.” So I did. Miles and miles of walking on an incline on the treadmill got me over my fear of falling off of it as soon as I turned it on. Then gradually, as my speed increased, it was a natural jump-off point to start to run. So I did.

After a year, I did my first 5K run outside. Nobody tells you how different it is to run outside with wind, inclines, rain and significantly, no telly to gawp at. I hated it. I retreated to my treadmill, grumbling never again. Until I did it again.

Two years ago, I moved to Greenwich, near the river and the most beautiful royal park with acres of lush greenery to run in – and best of all, bike-free paths. I knew this was my chance to learn to run outside. So I did. That doesn’t mean to say it’s got any easier, because it hasn’t. Running still contains something alien for me, but I am now addicted. Grudgingly addicted.

Now I have the prettiest running route ever, I really can’t complain. But I still do. Some mornings, like on Monday, I woke up after a tossy-turny night’s sleep and ran as if I was a gazelle. I stopped at 45 minutes but felt like I could have run all day. It was probably a good thing I didn’t try. Then yesterday, buoyed by Monday’s success, I set my goal at 46 minutes. By 5 minutes in I was looking at my watch and muttering to myself. The hills in Greenwich park are unforgiving.

Today I have yet to do my run, but 47 minutes is the goal. I plan to run 5 days this week, if my knees and ankles hold out. I might even set myself a 10K challenge soon. But don’t expect a marathon anytime soon. I’m grudingly addicted remember, not crazy.