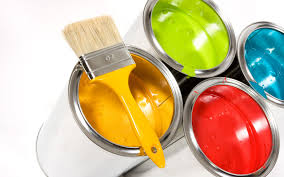 So next week, I plan to paint our spare room which is where I’m writing this from today, sitting at my newly built desk. The desk means I’ll be spending way more time in here from now on, so clearly it’s time to put my mark on it. Currently the walls are a sickly yellow with a feature wall of peppermint green, both a hangover from the previous owners of the property who clearly thought this was the combination to inspire their toddler son. It doesn’t inspire me so it has to go…

The problem with this plan is that I have an aversion to painting. I like the idea of it, but the actual execution I’m not too fond of. I think it stems back to hours of my life taken up staining skirting boards for family friends, an activity that doesn’t rate highly on the thrillometer of life. The other problem with painting is that it’s all about the preparation – and having been injected with impatience from birth, painting foreplay doesn’t come naturally to me. Sugarsoap the walls, sand the woodwork, mask the edges, cover the furniture. By the time you dip your brush in the gloss or get to slap on some emulsion, your neck’s cricked, your body aches and it’s all you can do to get the roller moving. It’s never like that in those Dulux adverts.

Painting does have its upsides though. First, guffawing at the paint names on offer and wondering how I get the job to make them up – I’d be a great paint-namer. I’m currently tossing up between Elephant’s Breath, On The Rocks and Chic Shadow – no, really. But they’re missing out on the wonders of Hairnet Grey, Bucking Bile and Aubergine’s Eyelashes. If only they’d hire me.

I’m also told that I’ll be awash with satisfaction once it’s done – the post-painting glow if you will, where presumably I’ll have to take up smoking and wink knowingly at the walls while swirling a single malt. It’s also been said that I might get a bit choked up at the finish, but not to worry because it’s probably just emulsion taking me over. Whatever, all I know is that for a 5ft nothing sprite like me, painting a ceiling is going to be a challenge. I’m going to have paint flecks in my nostrils for years aren’t I?