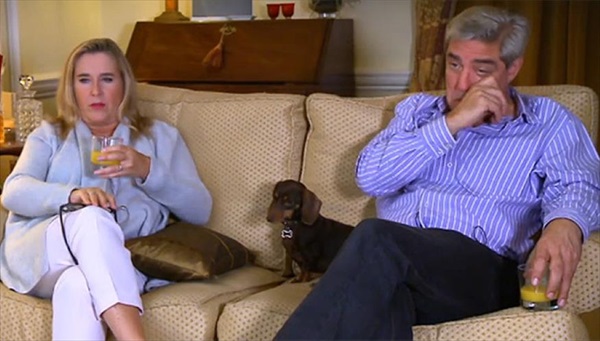 If you don’t know the premise, Channel 4 has stashed cameras in homes around the country so we can watch them screen-gazing and pontificating. Genius, right? Demonstrating cross-generational telly-viewing are the Siddiquis from Derby (sensible tea drinkers), the Tappers from London (crisps down the sofa) and the Michaels from Brighton (pelmets & pouffes).

First up, some breaking news: posh Steph & Dom run a posh B&B in Sandwich and you can stay there for as little as £160 a night – who’s in? Maybe once you’re there you can sidle your way onto their golden sofa, pat their pooch Gigi and settle down as they crack open the drinks cabinet as they do every episode. “Long Island Iced Tea?” asked Dom a couple of weeks back as Steph was grimacing at Kevin McCloud. “Do you think he knows he’s an arse?” she pondered.

Last week, Sandy & Sandra were convinced there was a mouse in their flat and spent most of the episode standing on the sofa screaming. Meanwhile, June & Leon have been married for 53 years and she has him on a strict diet to shed the pounds. “I’ve lost a stone!” he opined as he angled for a biscuit while sizing up Susannah Reid’s legs on Strictly. “If I had legs like that I’d show them off,” said his wife. “Your legs are better than that,” he replied. Meanwhile, forced to watch Boris Johnson, Brighton Chris commented: “She’s been cutting her own fringe again I reckon. That’s a bowl on the head job.”

The average adult watches just over four hours of telly a day and Gogglebox allows us to bathe in our favourite pastime till our skin goes wrinkly. What’s more it shows the unifying nature of TV, shown weekly with shows like the X Factor and Strictly – they may not be high-brow but they certainly allow us to cackle on our sofa along with our Gogglebox friends because that’s what Steph & Dom and Sandy & Sandra are now, okay?

If you haven’t already, tune in now because after a few series it’ll be all about the participants ‘journeys’: for now, they all seem blissfully unaware that we’re watching…

Like this? Check out more in the Popular Culture section.