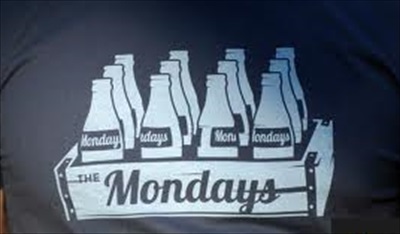 Having a blue Monday? Of course you’re not, that was last week silly when it was The Most Depressing Day Of The Year tm. What a difference a week makes, right? Nod your head. But the prospect of blue Mondays got me thinking – why are they blue? Blue’s my favourite colour so it holds no fear for me. Why aren’t they brown, magnolia or mint green?

I wouldn’t describe Mondays as blue because every Monday is an individual with Monday dreams and ambitions. Some are grey and porridgey, some are lithe and golden, some are bruisingly purple, some are just plain itchy.

Let’s take this year as a litmus test which has had two Mondays so far. Last week it was lashing down with rain, our front door had swelled shut and it looked like the apocalypse was ready to pounce. Cut to today and my garden’s bathing in sunshine, I’ve done the hoovering, Spurs squeaked past Crystal Palace and I made some stellar tea this morning. Not all bad is it?

Common accepted wisdom is that Mondays are a downer simply because they’re at the start of the week with a whole five working days ahead of you. Mondays are the clothing equivalent of putting on a new pair of jeans – they need to be worn in. But flip it on its head. Mondays can be the start of something new, something beautiful, something exciting. Got a new idea? You’ve got five days to work on it! Got some news to tell someone? You’ve got five working days to let them know! Ordered something off the internet? It’s got five days to end up lost in Yorkshire!

I think Mondays get a bad rep. They enable freedom of choice, they’re the building blocks of your success and they can be any colour you paint them. Plus, here’s a news flash – they’re not going anywhere and you’ve got 50 more of them ahead this year. So why not quit the shunning, show Monday some love and see what happens? Group hug Monday, group hug.