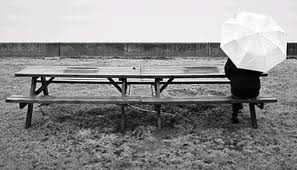 Hello and welcome to the Most Depressing Day Of The Year ™. Until the next one that is. But for now, it’s time to revel in today’s utter depressingness, sink back into its soft underbelly of misery, rub your face in its dark, downy despair. Ready to join me in a tip-top January funk?

I’m not sure quite who decides this is the Most Depressing Day Of The Year, but they’re sure to wear a once-white coat and spend their days in labs with test tubes full of happiness, despair and ennui. Today was the day they tipped happiness down the drain and chuckled mercilessly. Watch out for Ennui Monday, that’s in two weeks.

So why is today so dark? Well it’s a simple equation really if you look at the facts. First, you’re going back to work with the whole of January stretching out in front of you. January is gnarly. Nobody likes January, it always gets picked last in PE. Poor old January.

Third, you’re not drinking. You drank too much over the festive period and now you’re hanging your liver out to dry. This makes you feel strong and virtuous, but also a teeny-tiny bit suicidal.

Fourth, Morrissey has informed the world he’s partway through a novel, just weeks after he published his doolally-infested autobiography. Morrissey stated this weekend he believes eating meat is akin to paedophilia. It’s best to just remember the music.

What’s more, today is the 12th day of Christmas, time to take down the tinsel, pop the balloons, recycle the cards and burn your tree. Plus, the chocolate is all gone. Life is tough. What’s more, because you bought all those balloons, tinsel, presents and blow-up Santas, you’re broke and you don’t get paid for another three weeks. Rejoice!

Still, it’s not all doom and gloom. Let’s try to cheer ourselves up with happy thoughts and try to forget you’ve got a cold. What about the jollity that is our chancellor announcing more budget cuts this morning? Our brilliant cricket team that’s making us proud in Oz? Or that the next bank holiday you’re going to get isn’t until April 18th, which is a mere 102 days away. Mark it on your calendar. Happy January 6th!