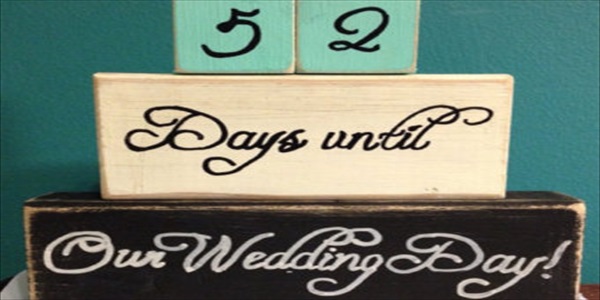 On Saturday March 29th, equal marriage will finally be made legal in the UK which is all sorts of awesomeness. On Saturday March 29th, it’s also precisely seven weeks until we get married which is all sorts of OMGness. I read an article in a magazine the other day and it listed all the things I should have done by now. I haven’t done half of them. Plus everyone keeps asking me how the plans are going, so I guess I should prepare a better answer than a manic smile and nod, right?

What nobody told me though was that in the lead-up to the wedding, absolutely everyone you know will ask you the same question every time they see you. Lean head to the left, widen eyes, clutch arm: “So, how are the wedding plans are going?!” Which makes me think they know something I don’t.

“They’re the same as when we booked them six months ago?” I tell them in a panic, and then rush quickly to Google Street View to check that the registry office is still standing and that the reception venue hasn’t turned into a TK Maxx. I just checked again, we’re golden.

And then that magazine list. Apparently I should have been liaising more, done some extra touching base, planned a hen night, chosen the music, So today, I’m going to make a list of all the schizzle that still needs doing and hope it’s not too much. Deep breaths!

And in the meantime, congrats to all the couples who are getting married on Saturday – it’s going to be an emotional day. I might even do a little cry. To celebrate, I’m going along to the Royal Festival Hall to watch Sandi Toksvig and her partner renew their vows. Which I think you’ll agree is a bit odd, but definitely very cool. Because who doesn’t love Sandi?