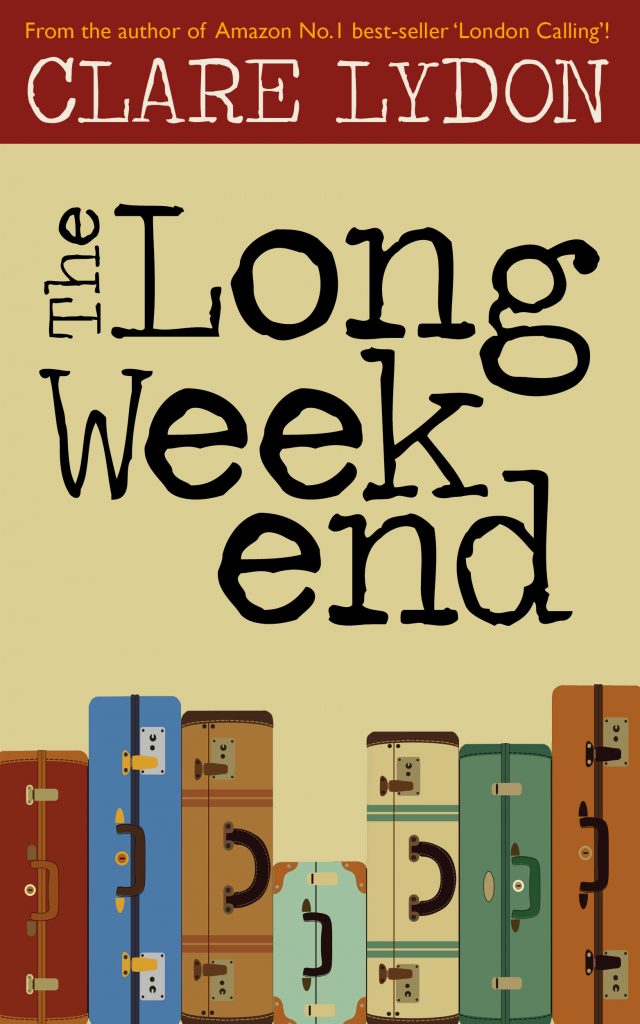 My new novel The Long Weekend is due out VERY SOON, but to whet your appetite I’ve decided to publish the first two chapters to get you in the all-singing, all-dancing new-book mood. Go on, give the first couple of chapters a hug…

The purple Fiesta hit another pothole where there should have been solid ground and the car slumped to the left like a well-rehearsed drunk.

Vic’s nausea rose. However, as she was the one who’d made the call to drive down this particular road/dirt track, she didn’t think Stevie would appreciate her sharing the fact that she might vomit any minute now.

Stevie tugged on the black handbrake, her fingers fitting into its ridges perfectly. It made a crunching sound, which fairly reflected the mood in the car.

“I’m not even going to ask if this is the right road, seeing as it’s not even a road.” Stevie surveyed her surroundings. “I’m guessing we should have turned right at that last junction?” Her voice didn’t hold the acute anger Vic had been fearing: rather, Stevie curled her lips into a weak smile.

“It’s the way it said on the map.” Vic wiped her palm across her clammy brow.

“Perhaps if you hadn’t been trying to eat a Flake without spilling it all over the car, you’d have been paying more attention.” Stevie sighed beside her, then blew a raspberry. She rolled her neck in a semi-circle from left to right. It rattled the whole way round like an old, rusty chain.

Vic ran her hand through her short, brown hair and took off her black glasses to wipe them on the hem of her shirt. Over five hours on the road had taken its toll on both of their nerves. The clock on the dashboard read 16.34. She put her glasses back on but wasn’t sure her vision was any clearer.

“What about the sat nav?” Stevie glanced sideways.

“The one that got us into this mess in the first place?”

Stevie stared straight ahead into the late Devon afternoon. There was not a single house or business in sight, just a few sheep in the neighbouring field. “At least it’s got a sexy voice,” she said.

The tension in the air silently popped.

“We haven’t seen a sign for miles, though,” Stevie added.

“Devonians aren’t big on signs. But they do make lovely cream teas.”

“Great. If we ever get to where we’re going, maybe we can have one.”

“That’s the spirit.” Vic stroked Stevie’s denim-clad thigh. Her wife’s muscle tensed but she ignored it. Instead, Vic flicked on the top light and surveyed the Collins UK Road Atlas in her lap. After a few moments she looked up, renewed certainty plastered across her face.

“I think I’ve got it,” she said. “If we get back onto the bit that was an actual road, we should hit the main road in, like, ten minutes. Fifteen tops. And babe?”

Stevie turned her head slowly, her short blonde crop hardly moving as she did so. Her skin sagged with tiredness, her complexion the colour of rice pudding. She was too tired to respond.

“I’ll buy you a beer when we get there.”

“You fucking better,” Stevie said. “And you’re pushing us out of this ditch if we’re stuck, too.”

Vic leant in and kissed Stevie briefly on the lips. She straightened up in the passenger seat, trying to ignore the fact Stevie’s body had just tensed again at her touch. Vic laid the map on her lap as the Fiesta’s engine roared into life again.

“What’s the ETA?” Stevie asked, looking over her left shoulder and shifting the gears into reverse as the tension hastily began its reassembly.

“That’s what you said last time. We will make it by Easter Sunday, right?”

Vic frowned at her sarcasm but said nothing.

“And any texts from the others yet? Are they on their way?” Stevie asked.

Vic reached into the door compartment and retrieved her phone. “Nope,” she said, shaking her head at her home screen, before carefully placing the phone back in its cover. Vic had a habit of killing phones; it was an expensive habit she was trying to break.

Stevie pressed her foot down on the accelerator and looked behind her. They both heard the engine rev but the car stayed still. Stevie pursed her lips and tried again: same result.

Vic screwed up her face as Stevie looked over at her.

“So you know that joke I made a few seconds ago?”

Vic let her eyelids settle, before taking a deep breath and opening her passenger door. “I thought driving your car into ditches only happened in rom-coms?” she said, before disappearing out of the car.

“For God’s sake, Simon, can you stop acting like a moron for one minute and listen to me?”

Laura looked out the window to her right, as if doing so meant she couldn’t hear the conversation her girlfriend was having with her ex. It didn’t work. They were still in the same car and Tash’s words reverberated off every surface, making her wish she’d got out to go to the loo at these services. It wasn’t like she hadn’t heard it before.

However, on this particular Thursday she could have done without it. Last night had been their annual awards dinner at work – a back-slapping jamboree where Laura was guaranteed never to win anything. On top of that, her line manager did win an award – on an account Laura had put most of the work into, so she’d had to sit and fume quietly.

Her response to such casual acclaim-stealing had been to bitch about her boss to her colleagues and drink as much of the company’s free booze as she possibly could. Hence, today Laura wasn’t at her best, her eyeballs dry in their sockets and her brain yet to reset itself to normal. So Simon being Simon wasn’t helping.

To her right a blue Astra pulled up with harassed-looking parents in the front and wide-eyed kids in the back. The little boy stared at Laura as the car drew level. She stared right back. Just over from that, a dark-haired man in jogging bottoms and trainers walked back to his car with a tray of Burger King meals, replete with extra-large drinks.

“No, I told you Monday – Monday morning…” Tash moved her foot from the dashboard where she’d been resting it. It’d left a mark.

Laura risked a look left and met her girlfriend’s gaze.

Tash rolled her eyes back as far as she could manage.

“Simon. It was always Monday. We were never coming back on Sunday and you’ve known this since we arranged it two months ago. So whatever it is you were planning on doing Sunday night will have to wait. We’re having a whole four days on our own with no kids. You’re their father, so deal with it.” Tash paused.

Laura could hear Simon getting wound up on the other end.

Tash sighed again. “The uniforms are in the bag. They’re washed and ironed. All you have to do is drive them to school.” Another pause, more aggravation. “I don’t know Simon – look it up on the internet. Or maybe talk to them and ask them what they fancy doing. They’re real people with real thoughts, you know. Look, we have to get going – tell the kids I’ll text goodnight later.”

Tash clicked the red button on her phone and threw it into her handbag, which was resting in the passenger footwell. She had good aim. She leant forward and smacked the dashboard with both hands, palms down to reveal a shock of freckles that resembled a Magic Eye puzzle from the 1990s. She let out a scream of frustration.

Laura kept an eye on the steady stream of service-station dwellers and allowed the scene to play out before turning in her seat and giving her partner a sympathetic smile.

“All go okay, then? No problems as usual?” Laura’s sides began to shake with laughter. She knew this wasn’t the reaction Tash would want right now, but sometimes it was the only one that sprung to mind.

With her head in her hands and fingers poking through her short red hair, Tash glanced sideways and shot Laura a look. “I’m glad this is all so very amusing to you.”

“Tell me this, though…” Tash said as she turned in her seat to face Laura, her face flushed fire-engine red, her eyes teary from exertion. “What on earth was my 27-year-old self thinking when I married that idiot? I mean really, what was I thinking?” She threw her hands in the air and twisted to face front.

“Babe, you were young.” Laura leant over to kiss Tash’s cheek, her long dark hair falling over the gearstick as she did. “If I’d married the girlfriend I’d had at 27, believe me I’d be in trouble too.” Laura let out a low whistle. “Loadsa trouble.”

“But you wouldn’t have to stay in touch with that person forever would you?”

Tash let out a long breath. “I love my kids, but I wish they didn’t have to involve him.”

Laura squeezed Tash’s leg lightly. “Well there’s nothing you can do about that – he’s their dad and I’m sure he’ll take care of them this weekend.”

Tash grumbled at this.

“But for now, we have a reunion to go to and we need to make a move. Do you need the loo before we head off?”

Tash shook her head and grabbed the bottle of Diet Coke that was resting in her drinks holder. She took a swig and offered it to Laura, who took a swig too.

“Sure? Because I’m not stopping again till we pick up Gimpy…”

Tash shook her head. “I can wait.”

“Okay then, let’s get this show on the road. And remember, this weekend is a chance for us to have some time – together and with friends. Let’s not let Simon spoil that.”

Tash exhaled. “I know, I know.” She paused. “Just give me ten minutes to get this out of my system and then I promise, no more Simon talk. Deal?”

“Deal. Now why don’t you put on some loud music and we’ll gun it all the way to Taunton.”

The Long Weekend is out now! Buy it by clicking on the links below – Amazon UK and Amazon US.