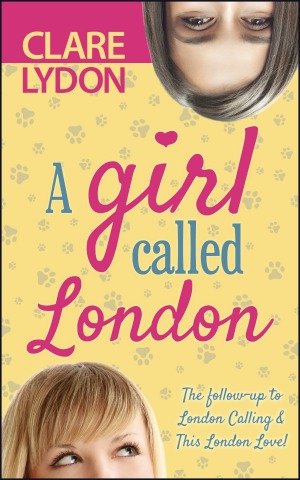 My new lesbian romance, A Girl Called London, is due out next month – huzzah! To whet your appetite, here are the first couple of chapters to get you interested. Let me know what you think in the comments below!

“I’ve got two pieces of advice for you. You got a pencil handy?”
“Sure,” Tanya lied, sitting on her sofa. Her gran sounded perky today, more like her old self.
“First, don’t grow old gracefully, okay?” Her gran cleared her throat at the other end of the phone.
“No problem, I’ll follow your lead,” Tanya replied. “And number two?”
“Stop working so much, loosen up, have more sex,” her gran continued, deadpan.
“That’s more than two pieces of advice.”
She could almost feel her gran smiling down the phone. “Okay, have more sex.”
“Have more sex it is,” Tanya spluttered, her cheeks heating up as she said the word ‘sex’ down the phone. Even at 83, her gran had a habit of making her stop in her tracks.
“I wish it were that easy,” Tanya mumbled under her breath. She didn’t want to count on her hands how many months it’d been, but she knew she’d need all her fingers and thumbs, repeat to fade.
“It is — just go out there, find a woman you like the look of and charm her.”
Tanya stared at the violet lounge wall of her rented flat: she hated the colour, but she wasn’t sticking around long enough to paint it. Perhaps a new address would give her more luck romantically, too? She hadn’t been inclined to charm any women of late: the thought of bringing them back here felt unrepresentative of who she really was.
“I’ll note it down,” she said. “I just need to locate my charm and we’re good to go.”
“You’ve got charm by the bucketload — you’re my flesh and blood!” Her gran’s voice went up at the end, as if she couldn’t believe her granddaughter’s hesitation. Tanya pictured her propped up in her hospice bed, laughing more than any of her bedfellows, just like always.
Her gran had always taken the starring role in her life and lived it in high-definition.
“Now I’ve given you my wisdom, next question: have you spent my money yet? I know we discussed a flat, but drugs and hookers would be okay too, if that’s what you need.” More coughing followed, and Tanya could tell her gran was getting a little over-excited.
Still, she wasn’t going to scold her.
Not now.
“I haven’t spent it yet,” Tanya replied, flexing her toes. “Although I am seeing a place this weekend that looks promising, so I’ll report back. It’s by the river.” She paused. “And if it’s good, I promise I’ll blow a grand on cocaine and hot women to celebrate.” She smiled at her own joke, at the absurdity of it. She was more likely to buy a bottle of decent red, but she didn’t want to dampen her gran’s spirits.
Her gran rasped down the phone at that, before succumbing to another coughing fit.
Tanya waited for her to recover; she knew it would take a few moments.
“Take photos, please,” her gran said, when she had her breath back. “Of the flat, too.”
Now it was Tanya’s turn to laugh.
How her gran had managed to spawn her humourless mother was a mystery.
“But seriously, I want to know my only granddaughter has somewhere decent to live before I die.”
Tanya shook her head: that outcome was too outrageous to consider, so she squashed it down, along with the clamour of emotion it brought with it. “You’re not going to die, Gran.”
There was a pause before her gran replied. “We’re all going to die, sweetheart,” she said. “I’m just a little closer than most.”

A Girl Called London is the brand new novel in the London Romance series, due out in June. You don’t have to have read London Calling or This London Love to enjoy it, but why not read them first so you can get the most out of it?