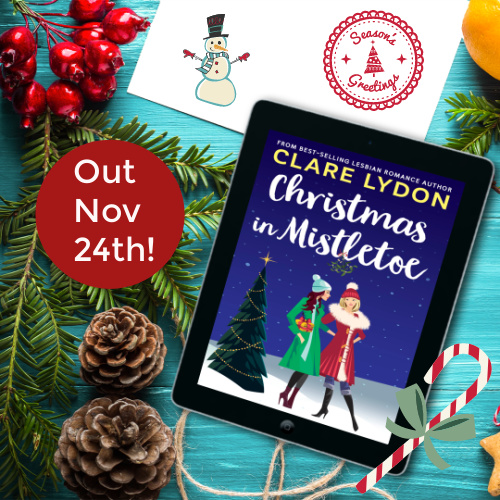 My new festive lesbian romance, Christmas In Mistletoe, is out on November 24th. Hooray! In it, you can expect a Christmas-loving singer, a festive curmudgeon, a growly dog, a Christmas Tree farm, mulled wine, twinkly lights, love, romance, angst and a nail-biting finale. All this, set in Mistletoe, with an eccentric cast of characters! If you love Christmas movies but have been longing for one with two female leads, this book is for you. Here’s the first chapter to get you in the festive mood…

Christmas In Mistletoe: Chapter One

The hairs on the back of Fran Bell’s neck stood up, one by one, as if preparing to applaud. She tilted her gaze at the singer in front of her, squinting against the glare of the bright stage lights. Fran didn’t look away. She couldn’t.

Ruby O’Connell had Fran under her spell.

Fran hadn’t checked her phone once during the whole performance. Hadn’t had one other thought but Ruby, with her long, willowy body, confident stare, and voice like painted gold. Fran had been to a lifetime of gigs, but only a handful had made her react like this. Ruby O’Connell’s voice told a thousand bold stories. Fran wanted to hear more.

Damian, Fran’s colleague, nudged her. “What do you think?” he mouthed, his blue contact lenses glowing in the dark.

She leaned in to shout in his ear. “I think she’s a bloody slam-dunk.”

Ten minutes later, and the whole crowd in Holborn’s New Moon Jazz Club surged to their feet. Whistles sounded from the back, along with stamping of feet. A shout of “more!” from the man to Fran’s right. He was just voicing what everyone was thinking.

Ruby bowed, thanked the crowd for coming, then walked off-stage. She pulled the leather strap of her acoustic guitar over her head and put the instrument down, then gave her bass player a hug.

Fran followed Ruby’s movements, just in case she was leaving. When Ruby headed towards the loo, Fran turned to Damian. “She was fucking incredible. It’s a travesty she’s not headlining tonight.”

“Totally agree.” Damian pulled in his chair, his 5 o’clock shadow pronounced. He was one of the hairiest men Fran knew.  “What a voice. It oozed class. Spoke to my soul.”

Fran raised an eyebrow. She hadn’t taken Damian for a poet, but he constantly surprised her. “I hope she listens to what I have to say. I’d love to work with her. She’s a little different to Fast Forward.”

Damian snorted. “Understatement of the year. But Fast Forward will be fine. I have faith. You need to get some, too.” Damian turned and got his phone out. He checked it, then raised his head, giving Fran a stiff grin.

Now they’d seen Ruby, he wanted to leave. As his boss, Fran wasn’t sure how long she should toy with him. Maybe another few minutes.

“Nine thirty. The final act’s on in ten minutes. It’s going to be at least another hour before we’re done.”

Fran twisted her wine glass on the round wooden table, and watched how the dim amber hue spilling from a small lamp turned her Merlot a warmer shade. She loved these venues: dark, intimate and with more than a hint of debauched times gone by. It was a far cry from some of London’s sticky, grimy clubs. Plus, you got a seat. Fran totally got what her dad meant now when he refused to go to any gig without a seat. There was no danger of getting a pint of Stella flung at you here. As if to illustrate her point, the people beside her made room on their table for another glass of wine and a charcuterie board to share. Eating at gigs. Only in jazz clubs.

Damian’s face was a stricken picture. “Really? Another hour?”

She was being unkind. But she was sort of enjoying it. Fran nudged him with her elbow. Being unkind to Damian was like toying with a puppy. “I’m only kidding.” She inclined her head towards the exit. “Go. Do whatever it is young people do on a Wednesday in town.”

Damian returned her look. “The same thing you do?”

Fran used to think that. But lately, as she’d just tipped over to 36, she’d begun to think otherwise. Now, at times, the lure of a cuppa was far greater than the lure of another glass of wine. Her dad would laugh at her for thinking so. But as her music industry job involved so much going out, staying in was a treat for Fran. Sofa, tea, movie. Bliss.

Damian, though, being 29, was already up and away, grabbing his jacket and legging it before Fran changed her mind. She followed his retreating form, but then her attention was snagged by the returning Ruby O’Connell.

Fran raised her chin and got up, tracking Ruby with military precision. She brushed down her navy jeans and pulled on the cuffs of her black shirt.

Fran waited for the crowd to die down, and for Ruby to return to the rest of her band. Once Ruby had given her friends her first relaxed smile, Fran swooped. She’d done this enough times; she knew the drill.

She cleared her throat to get Ruby’s attention. It worked.

Ruby turned, her reddish-brown hair not as vibrant away from the bright lights of the stage. However, the intense gaze of Ruby’s emerald stare locked Fran in place. Her eyes had looked incredible from a distance, but up close, they were even more alluring. How old was she? Her smoky voice and old-soul vocals made her seem older. When she sang, Ruby could be any age. Up close, though, she was probably no more than 30, max.

Her handshake was firm, her stare true. This obviously wasn’t the first time this had happened to Ruby.

“Fran Bell, Dronk Records.” She turned up the wattage on her smile. “You were incredible. You have an absolutely amazing voice.”

As Fran stared right back, her gaydar pinged, but she ignored it. Ruby’s sexual preference had nothing to do with tonight or what she was here for.

“I wondered if you’d like to come in for a meeting. We’d love to work with you, have you put out a new album with us. Gigs, album, touring. The whole package. We’re currently lining up our Christmas gig schedule, and I could see some venues where you’d be perfect. I know Christmas is seven months away, but it comes around quicker than you think.”

Ruby gave her a weird look. “Happens every year, apparently.” She paused. “You’re offering me the chance to gig and make an album?”

Ruby swept her cool gaze around the room, before settling it back on Fran.

Fran kept her smile in place. She couldn’t read Ruby.

“As you can see, I already do that. You’re here at one of my gigs. I have an album out, too. People come to see me, they buy my music. It’s already happening.” As if to prove her point, Ruby broke off to sign an album for four fans, chatting with them and taking selfies.

Fran gave Ruby’s band a tight smile. She felt more like a spare part than she had in a long time.

Eventually, Ruby turned back to Fran, giving her a ‘see-my-point?’ smile.

Fran picked up the baton. “I totally get that you’re an independent artist, one with a great platform. But what I’m offering is the chance to do so much more. Build on that. Really get your name out there. You’re on Spotify now, right? All the other streaming services?”

“We could make sure your streams go up exponentially. Give you the exposure you richly deserve. We have press contacts, venue contacts, we could put you in touch with terrific songwriters to work with, too.” Fran paused. “I bet you don’t make a full-time living with your music yet. That you do other jobs on the side, just to make ends meet?”

Ruby tilted her head, her striking green eyes clouding over.

Fran didn’t want to see that.

“I do a little more than make ends meet. Yes, I do some voice coaching on the side, but I’ve built my music career and platform organically, and I’m still very much in the game seven years down the track.” Ruby drew back her shoulders. “Which is why I don’t need you to swoop in and save me with promises that may or may not come true.” She waved an arm around the venue. “I’m not a star, but I don’t want to be. Enough people know me and come to see me. I do just fine.” She put a finger to her chest. “I’m my own boss, and I like it that way.”

Fran gulped, no idea what to say.

A hint of contrition crossed Ruby’s face. “Sorry, you just pressed a button. I’ve been down this road before with a former label and I don’t intend to do it again. It’s not personal.”

Fran stood up straight, a blush crawling up her cheeks. It certainly felt personal. She knew Ruby had been with a label in her early years, but had no idea why the relationship had broken down. She’d certainly never had this sort of reaction before. A record label seeking out an artist after a show was normally a thing to be pleased about.

Ruby O’Connell was not most artists.

“How about just an hour of your time? Just to outline what I can offer. You may have been burned before, but I promise you, I’m a fan. I came here tonight to see you play live. I know you’re special and I want the rest of the world to know it, too. I’ve helped a lot of artists before including The Grab Band, Trisha Star and Delilah, so I know what I’m doing. I’m sure you’re well aware of how incredibly Delilah’s career is going in particular.” Delilah had also blown up Fran’s life, too. But that was on a need-to-know basis.

Tonight was about Ruby O’Connell.

Ruby assessed Fran, as if running a lie detector down her body, seeking the truth. “You did a great job with Delilah, I’ll give you that. But we’re hardly the same market. She’s pop. I’m not.”

She wasn’t going to budge, was she?

“I appreciate everyone who comes to see one of my shows. But my stance hasn’t changed. I’m an independent artist doing my own thing.” Ruby smiled to soften the blow. “But I’m glad you enjoyed the show. It’s always what I want to hear.”

Fran ground her teeth. “You were sensational. Is there anything I can do to change your mind? I can make you as famous as Delilah. Maybe even more so.”

Ruby shook her head. “Not everybody wants that, though. But, thank you. It’s nice to be asked.”

Christmas In Mistletoe is out on November 24th on Kindle. It will be on sale everywhere else for three days beforehand, from November 19th-21st.