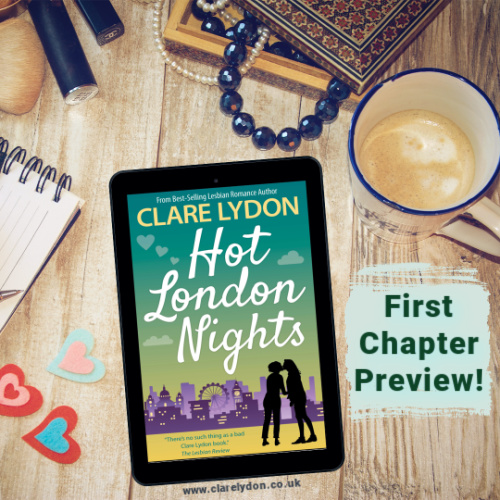 Book seven in the London Romance Series, Hot London Nights, is coming out on January 28th. Woohoo! This one is the story of love-shy Gina Gupta and TV star India Contelli. It involves family drama, steamy romance, London rooftops and a secondary love story to melt your heart. Want to read the first chapter to get a taste? Read on…

India Contelli glanced around the third floor of Bloomsbury House, scanning the sparse crowd for her brother, Luca. He wasn’t here yet. She’d belonged to the private members’ club for years, but having been away for three months filming in New York, she hadn’t used it for a while.

Now she was back, India hoped London would be more welcoming than when she’d left. She was determined to make it so. Even the wool-grey sky lingering outside the large square windows wasn’t putting her off. She pulled back her broad shoulders and straightened her spine.

This was home, and this time, she was going nowhere. Nobody was going to drive her out of her own city again.

A teaspoon clattering to the floor made her turn her head. A waiter bent to retrieve it, apologising to the couple two tables away. The space was only half full at midday in late January, business meetings and lazy coffee breaks taking place on plump, expensive sofas and marble-topped tables. The tall ceilings and ornate stonework lent a sense of grandeur and history to the space. India’s parents and grandparents had been members, too.  The smell of freshly ground coffee coated the air, along with hot buttered toast.

She glanced out to the rooftop terrace, empty save for a solitary pigeon, its grey-and-white belly fat as it strutted across a tabletop. The terrace had the kind of views India wanted in her next pad: in the thick of it, looking at London from the top down. She’d love to move in here, but even she was on a budget.

She sat down on a lush, red velvet couch, then draped her coat over its arm. A waiter appeared in seconds, took her order and delivered her glass of Chablis at speed.

When India looked up, a figure heading her way caught her gaze. Tall, dark hair, aquamarine eyes. They were a carbon copy of each other, and both gay, too. Their parents had been baffled at first, but now, they just wanted grandchildren, and they weren’t fussy how it happened.

When her brother reached her, she got up and they embraced. He took a seat beside her, his chiselled jaw prominent, his fake tan perfected. His teeth shone almost as bright as his Cartier watch. They’d grown up rich, and it showed.

But now, India wanted to give something back.

Luca flagged down a waiter and ordered a black coffee. He did it in the way Luca always did, which meant the waiter fluttered his dark eyelashes Luca’s way before he left. Her brother had that effect on men. India had the same effect on women. So far though, definitely not the right women.

“You really should stop being such a shameless flirt.”

Luca ran a hand through his shiny hair and gave her his charming grin. “A little harmless flirtation makes life more interesting. You should try it sometime.”

“It normally ends in tears.” She didn’t want to get into that today. “You look gayer than when I last saw you. Is that possible?”

“I wasn’t sure it was possible to squeeze any more gay out of me, but if you say so. You’re a lesbian icon, so I have to believe it.”

India rolled her eyes. “Aren’t lesbian icons meant to have a stream of women knocking at their door?”

“You need a permanent door for them to knock on.”

He had a point. She sipped her Chablis.

“Not doing dry January?” Luca inclined his head towards her wine.

“Mother will be pleased.”

“We’re looking into it more seriously now.” Luca twisted the band of his wedding ring. “Surrogacy.”

India put a hand on his knee. “A baby Luca or Ricardo will be gorgeous.”

“I hope so.” He gave her a smile. “Anyway, enough about me, how was New York? Did the filming go well?”

She nodded. “It did. The new series is wrapped, now we wait for it to hit the screens.”

India was an accidental semi-TV star, doling out business advice to new shop owners in the UK and now the US in her show, Shop Wars. She looked good on camera, and her confidence shone through. When it came to business, India had her shit sorted. Their family biscuit and confectionery company, Stable Foods, was one of the best in the world, and she was its incoming head.

“But now I’m back, I wanted to talk to you about a new project. One I might need your help with to persuade Dad.”

Luca sat forward. “He pretty much trusts you now, doesn’t he? Isn’t he retiring this year?”

True, to a point. “He’s still a little touchy when it comes to gay things.”

“Aaaah.” Luca thanked the waiter who brought his coffee, added sugar, then stirred.

“We had that whole campaign with the Chocolate Delight spread, and it was a smash hit with the LGBT+ community. This year, I want to get involved with London Pride and do something queer with the business. Make a statement.” India had hatched her latest idea on the plane back to the UK. “I want to produce a Pride biscuit. Something rainbow themed and fabulous.”

“I’m here for anything fabulous. Let’s talk to Dad at our monthly family dinner in a few weeks. You are coming to the one in February, seeing as you haven’t been to one since October when you left?”

She nodded. “I am. The lone spinster will be there, among the loved-up couples of my family.”

He leaned over and kissed her cheek. “A Pride biscuit is sure to bring all the girls to your yard.”

“I’m restarting in February. Or maybe March — I’m doing a lot of business travel next month.”

“I thought you were back now?”

“I am, but I’m just taking some weight off Dad and doing a few European trips.”

“You are the model daughter.” Luca smiled. “Good job I’m giving them a baby, otherwise I’d be well down the pecking order.” He paused. “Why don’t you ask Dad for his estate agent’s number?”

“Because I want to do this myself. I don’t want Dad’s agent involved. I want this place to be mine, something I find.”

“I understand that.” Luca and Ricardo had done the same with their place in Surrey. Luca had gone one step further and left the family business to pursue his career as a photographer. It’s how he’d met the love of his life, Ricardo being a model.

India was yet to meet hers.

Working in the family business had its limitations.

“If we can help in any way with the search, let me know. For what it’s worth, Dad will see the PR potential of the Pride biscuits. The Chocolate Delight campaign was a success, right?” They’d run their chocolate spread campaign last year with a lesbian slant, and it had received a terrific reception.

She nodded. “Huge. But he still gets nervous when it comes to alienating any group of people. But I don’t see an issue with being the gay food company of choice.” She snagged his gaze. “If you could hurry up and get pregnant, it’d give him something else to focus on.”

“If it helps you out, we’ll kick the process up a notch.” Luca leaned forward. “I missed you, by the way.”

He drew a cross on his chest with his index finger. “I did! We did. Christmas wasn’t the same without you.”

India shrugged. “After everything that happened with Andi, I needed to get away. The series came along at just the right time.”

“I know. But we missed you. London missed you. Even Mum and Dad did. I could kill Andi for doing what she did.”

India shook her head. She didn’t want to dwell. She’d done enough of that. “It was nice to do something different. I spent Christmas Day walking around Manhattan, and the evening in my hotel bar, sharing love wounds with a gorgeous gay barman. I needed some time.” It’d been healing going alone, too. Given her space to focus on what she really wanted.

“Have you heard from her since you got back?”

India shook her head. “Now I’m here, I’m going to focus on growing the business with Dad and making a real difference in the queer community. Give some money to projects, boost our profile.”

Luca eyed her. “The lesbian Mother Teresa, is that the look you’re going for?”

India smirked, glancing down at her jade-green Armani suit. “I think we can spin it a bit better than that, can’t we?”