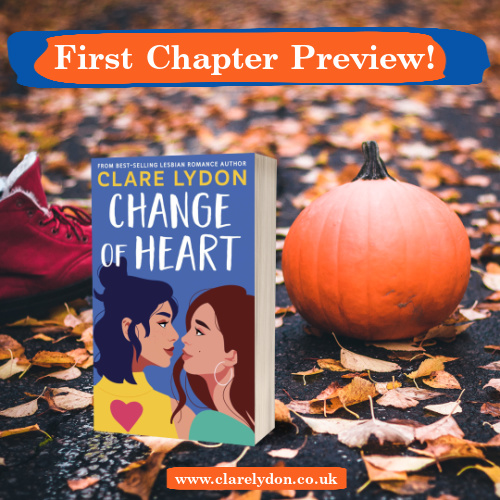 My upcoming lesbian romance, Change Of Heart, is out on October 26th. Woohoo! But if you can’t wait that long for my fake relationship romance that’s packed solid with damsels, desire, drams and drama-rama-rama, then you can read the first chapter right now to get you in the mood. I hope you’re excited for the story of Erin & Steph, set in the glorious Scottish Highlands. I know I am!

Change Of Heart: Chapter One

“I’m not going.” Erin slurped the last of the marmalade gin from her wide-rimmed glass, then sat back and closed her eyes.

“You’re not going? To your own parents’ 40th wedding anniversary party?” Morag’s face was stencilled with disbelief. “I’m bloody going, even if you’re not. Your parents throw a mean party. Remember your mum’s 60th with the vodka ice sculpture and the live-band karaoke?” She waved her arm, the sleeve of her baby-pink batwing jumper catching on the open packet of crisps, making them spin on the table. Morag caught them before they cascaded to the floor and into the grateful mouth of the pub dog, a chocolate Labrador named Freddo.

Erin did remember. She’d drunk far too much ice-cold vodka, got pissed and tripped off the stage in the middle of a rousing rendition of Chesney Hawkes’ ‘The One And Only’. But she’d styled it out like a pro and gone around the crowd with her cordless mic. Relatives still brought it up to this day.

“I also recall thinking then it was a bit tragic I didn’t have a partner to go with.”

Morag’s face dropped. “You had me!” Her full, round mouth turned down at the corners, her curly red hair outraged on her behalf.

Erin screwed up her forehead and patted her best friend’s arm. “I know, and you’re the best. But back then, I was only 27. If you’re single in your twenties, that’s okay. But ten years on, nothing’s changed. I can’t face all the questions from my extended family about my single status. It gets worse every year. Plus, you know how things are with my parents. They’re so relentlessly chirpy and determined to show that everything is fine. So yes, I’m going away.” But where to? She decided in an instant. “I’ll go to the Seychelles. Just me, the sun, and my lonely heart. I’m not going to be the 37-year-old curiosity at my parents’ party.”

This time, Morag threw her head back and chuckled loudly. The Falcon, their local, was crowded. Two women in their 50s wearing hiking apparel at the next table turned to look at them, and Morag gave them a wave.

Erin covered her face. Morag had always been embarrassing.

“Shall I get you another drink or will you get even more maudlin?” Morag secured a fistful of curls behind her right ear. She got up, not waiting for an answer, then turned to Erin before she left. “Gin and tonic with extra bitters for the drama queen?”

Erin filled her cheeks with air, then blew out a raspberry. “Normal gin, please. That marmalade-flavoured one made me crave tea and toast.” Her shoulders slumped. “I know I have to go, but I don’t want to. Why don’t you come and pretend to be my girlfriend?”

Morag baulked. “If Patsy and Duncan don’t invite me purely for my sparkling personality, I’m going to be mortally offended.” She paused. “And while your plan is a great one, your friends and family all know me. They also all know I’m straight. I’m hardly going to suddenly find you delectable after all these years, am I?”

Erin would go to the party. She was just venting, and Morag knew that. But why was her relationship status such essential news? She was successful in every other aspect of her life, wasn’t that enough? Not according to her grandmother. “It’s my dying wish to see you settled,” she’d told her at Christmas. If Morag wanted dramatic, Erin had learned from the best. Her gran was fit as a fiddle with not even one foot in the grave.

Morag arrived back with their drinks—gin for Erin, sauvignon blanc for her. She gave Erin an eyebrow raise as she sat.

“You know, what you just said made me think. About me pretending to be your date.”

Erin blinked. “You’re going to do it?”

“Course I’m bloody not. For a start, what would Tim say?”

“You’ve only been out a few times.”

“No, it made me think about this podcast I heard recently. The one about relationships.” Morag ploughed on. “They had this guy on—I forget his name. He was talking about this agency he’s set up for people who need a friend or a date.”

“I’m not hiring a hooker for my parents’ party.” Erin had standards, and that was a non-negotiable. She wasn’t Richard Gere.

“I’m not talking about a hooker!” Morag sipped her drink. “Also, who calls them hookers anymore? They’re escorts these days.” She tapped the table. “Back to my point.”

“Of telling me to hire a hooker?”

“No! This bloke runs an agency where you can hire a professional actor for just such an occasion to be your pretend girlfriend. No strings attached. It’s not an escort agency. These are out-of-work actors who’re tired of being extras in EastEnders. You don’t have to sleep with her, you don’t even have to kiss her. She’ll just turn up and be your pretend-girlfriend for the whole weekend. It’s perfect when you think about it.”

“It’s desperate when you think about it.”

Morag gave her a pointed look.

Erin blinked, then puckered her brow. “I am not desperate!”

Their outdoorsy table neighbours turned their heads again. Was it Erin’s imagination, or did they lean in this time?

Morag snorted. “No, the whole pub believes you. You did just shout it at them, which is always the best way to convince people.”

Erin rolled her eyes. “Even if I did hire an actor, how on earth would I get my parents to believe it? We speak every week.” They were used to her being single. She couldn’t just spring a woman on them.

“You tell them you’ve met someone a month or so earlier. It’s not like you live around the corner from them, is it? They live in the Highlands; the last time we drove there it took us four hours. Unless they’ve got cameras in your flat, they will not know you’re not humping a new woman 24/7.”

Erin considered it, then made a face. “It’s not happening. We’ve got too much on to even consider it.” Their Edinburgh decorating company, Female Flecks, was booked solid for months. Home improvements were something that never went out of fashion, and a female-run decorating company was different enough to score a steady stream of clients. “Plus, it’s not just my parents. What about Alex? I’d have to lie to him, too.”

“So? He and Wendy are far too busy running after their triplets to worry about your dating life. Plus, they’d probably feast on the distraction. Something shiny and new to talk about that doesn’t involve potty training or toddler tantrums.”

That was true. Erin always felt in her brother’s shadow because he had a grown-up job as a doctor, along with a wife and kids. It didn’t matter that she ran her own company. In her head, Alex always trumped her.

Then, of course, there was Nadia.

“I know they’d be happy for me, but that might make it worse knowing it’s all a lie.” She stuffed a couple of cheese-and-onion crisps into her mouth while her mind buzzed with possibility. “I’m always the odd one out. Mum and Dad, Alex and Wendy. Even the triplets have got each other.”

“So change the narrative. What’s the harm? You’ve never taken anyone home. Make this time different.”

Erin always thought she would have met someone by now. Introduced them to her family. But she hadn’t exactly sieved the city in her search for true love. Would hiring someone to play her girlfriend be any worse than turning up on her own? Plus, the family tensions always ramped up around special occasions. All the things left unsaid. Maybe a new person would shift the spotlight.

“How about if I look into it? Speak to this bloke or someone he works with. Find out the details.” Morag tilted her head. “It’s not like you can’t afford it. You’re always telling me you have money to spend, but you’ve nothing to spend it on. Why don’t you consider this an act of self-care? Some people meditate, some go on a spa weekend. You can hire yourself a gorgeous girlfriend for the weekend, just to take the pressure off and make the whole thing more bearable.”

Erin pictured the scene in her head. Walking into the party with someone on her arm, instead of being alone. In her stomach, the pit of despair warmed. It would be nice. Heck, it would be a huge sea change, and it would mean her Aunt Helena wouldn’t come up to her and pat her arm conspiratorially, telling her there was nothing wrong with being a loner, just like her.

She sat up. Perhaps hiring someone would be better all round. No feelings to navigate. The woman would do what Erin wanted. She’d have complete control, something she’d been striving for ever since… Well, ever since her life changed.

Plus, Morag was right. She could afford it.

“Fine. Look into it. But I can’t see it happening. For one thing, whoever I hired would have to be queer. Or else, a very good actor.”

Her best friend frowned. “You want a queer fake girlfriend? Did you not hear the part about them being an actor?”

Erin squeezed her shoulder blades together. “I know that. It would just make things easier if they were queer. They’d know about family pressure.”

Morag gave her another pointed look. “The pressure you’re under from your family is all in your mind. Your brother loves you. So do your parents.” She paused. “I know this is about Nadia, too…”

“Stop.” Erin sat up. Her heart thumped in her chest. It still happened, even so many years on. “This is about me and my inability to have a relationship.” She snagged Morag’s gaze. “But you’re right, walking in with someone would be nice. Look into it and see what you come up with.”

My brand-new lesbian romance, Change Of Heart, is out on October 25th.