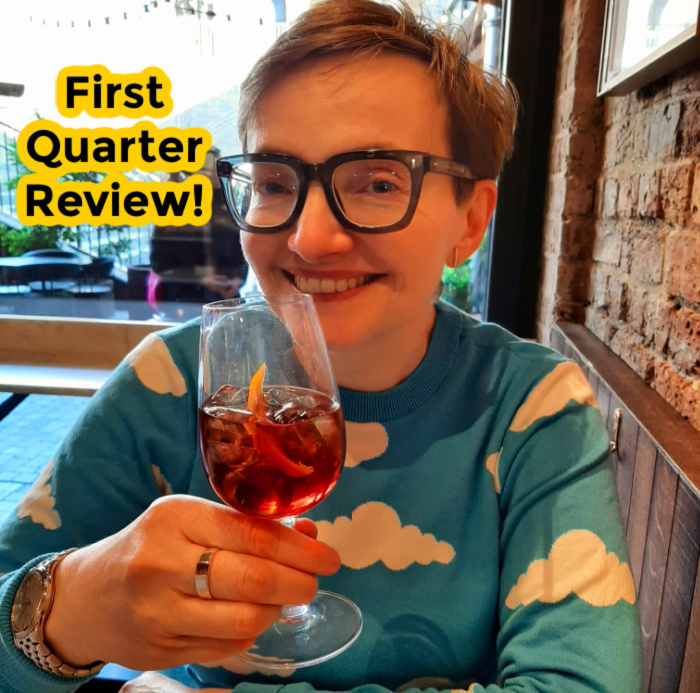 The first three months have been quite the trip, haven’t they? The pandemic carries on regardless, society is on the precipe of the next world war, and LGBT+ rights are being decimated around the globe. It’s hard to focus on the day to day, but truly, that’s all we have. I want to keep writing stories to combat the hate and prejudice in the world. Also, because I love it and it’s good to focus on that. With that in mind, how’s the first quarter gone? Read on for more…

1. My Christmas book is on the road!  It’s been two years since my last festive romance, and for someone who loves Christmas, what the hell is that about? This year, I’ve got a head start on the story, and my festive romance is written to draft three. Just a polish and an edit needed! (Famous last words…)

2. Ohmygerd, the new book is close to going to the editor! A modern-day miracle and no mistake. Then I may collapse in a heap. I’ll be honest, there have been times when I doubted this one would make it over the finish line. But I gave myself time to breathe, and now I’m almost at the stage where I sort of like this book. Then it’s fret-time, while I wonder if this is the book that sinks my career. The struggle is real!

3. I booked all my covers and editors for the year. Deadlines are in place. I better get a wriggle on, hadn’t I?

4. When I started out, my company wasn’t only doing books. I was also an online digital music streaming consultant, and Custard Books was my book imprint. However, now there is only that part of the business, I ditched the umbrella name and I’m now just called Custard Books. This has been something I wanted to change for a while. It was a little painful, but I’m pleased it’s done!

5. I signed two more German translation contracts in Q1. By the end of 2023, I’ll have six German titles out, and two German audiobooks. Exciting! I’m also looking into translations in other languages.

6. Change Of Heart audiobook is commissioned and in progress. I used Findaway Voices for this one, a new way of doing things for me. I’ve also used a fresh narrator who can do a great Scottish accent. I’m looking forward to getting it out into the world!

7. I’ve kept up physical training and yoga as much as I could when I’ve had health issues. I’m calling that a win.

8. I went on a writing retreat to Whitstable which was fab, and I got a ton of writing done.

9. After a few wobbles, I bedded into my new writing space at my hot desk office building. It was originally a short-term option, but I’m thinking of keeping it going as long as it works.

10. I made my movie debut in the docu-drama, Gateways Grind! It was shown at the BFI Flare festival and that was pretty special.

With a fair patch of health issues (including covid) and family issues running in the background, I’m pleased with my first quarter progress. Q2 promises more to do, but I’m looking forward to it. I hope you had a productive and happy first three months of the year!