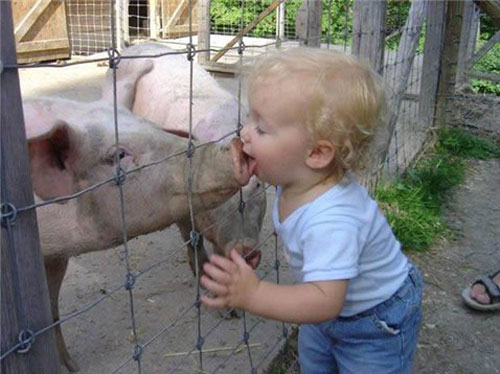 So it turns out that 100,000 people think they have swine flu, according to new government figures – and after contracting a runny nose and sore throat, turns out I’m now one of them. But rather than take a trip to my local doctor’s surgery – a low-rise 70s building filled with all manner of lifeform, only some of them human – I thought I’d consult the new swine flu website that’s been set up recently.
First impressions weren’t good. Where are the shiny Flash intros and spinning logos? I bet the US swine flu websites have spinning updates of the death toll and webcams of the dying. ‘See his rasping cough – only 29 minutes to go!’ Etc. Ours just has a picture of a bloke with projectile snot looking a bit embarrassed: “Awfully sorry, let me wipe that from your eyelid” and so on.
So, have I got swine flu? Well, I’m not quite oinking yet but I am a bit pink so the signs are ominous. Should I start to want to fry myself, smother my body in ketchup and run outside looking for bread to rub up against, that’s a whole different ballgame. But before that happens, let’s consult the website.
What are the symptoms of swine flu? Turns out they’re a high temperature, runny nose, sore throat, nausea, vomiting and diorrhea. All a bit vague isn’t it? I mean, I have a temperature (not dead), runny nose and sore throat but none of the others. I do have fatigue mind. But then I have been working and going to the gym. And just, well, living and that. Changing the loo roll, eating Eclairs, watching Dragon’s Den, plumping up cushions – these are all tiring activities. Which makes me wonder – don’t loads of people have these symptoms and drag them to the doctor’s every day in their battered mental suitcase? These are the symptoms that doggy-paddle in our minds all year round as people call in with vague ‘not-feeling-well’ suggestions to their boss, then snuggle up under the duvet with nine chocolate-covered digestives while pressing play on their DVD of Dirty Dancing. It’s not that they don’t feel unwell, it’s just that Jennifer Grey and Patrick Swayze on that log will make them feel a whole lot better.
So in reality, swine flu is a great excuse to have a few days off while your boss thinks that you’re doing a great public service by not coming in. Now that the world has gone tits-up and the economy has fallen hard on its face, swine flu is our small red-ribboned gift – ‘go on’, it says, ‘have a few days off, you deserve it!’