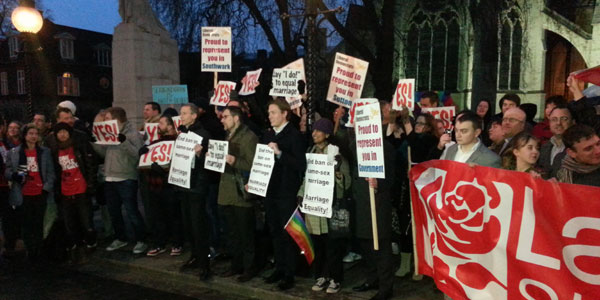 February 5th was a historic night in my life, in the life of British politics and the British populace. This was the night that parliament voted overwhelmingly in favour of same-sex marriage, thereby ushering in a new era of marriage where it’s open to all, whoever you fall in love with. No longer are gays and lesbians second-class citizens at the wedding breakfast – soon we’ll be able to call it a wedding, call our spouse our spouse, and dualities of husbands and wives will be commonplace. This is so astonishing that even writing it is still astounding…

I am a child of the 1970s. Back then, the Marriage Equality Act had just come into force, ensuring that marriage was something only heterosexual couples could do. Growing up, I had no words to put to how I felt: displaced, different, unsteady. There were no role models to look up to, no gay or lesbian characters on TV, no openly gay celebs to pin my future hopes on. Having lived through the last devastating Conservative government & Section 28, the idea of being able to get married seemed as likely to me as flying to the moon.

But then, hang on. Along came Tony Blair & Labour, introducing Civil Partnerships quicker than you could say it. One minute, nothing; the next, you can be nearly married. Nearly, but not quite. Still, it was a huge step, giving lesbians and gay men the same legal protection and next of kin status that straight couples never even think about.

And in the meantime the world began to spin faster, walls falling quicker, attitudes changing faster. At some point, being a lesbian was even considered fashionable – but then I always knew I was a trendsetter. And then the ultimate – David Cameron, a Conservative Prime Minister, said he was in favour of gay marriage. As did US President Obama. Incredible.

On Tuesday night, I went down to the House Of Commons to show my support for the bill. It was a cold, dank night and by the time I’d walked to Westminster from my work at Holborn, it was drizzling with rain and my hands were numb even through my gloves. As Big Ben chimed five times, I joined a clutch of gay rights activists with banners and party affiliations opposite Westminster. The mood was upbeat – we expected this vote to be passed. But then, the Conservatives were fighting bitterly over this issue so you just never knew. Would standing outside parliament be enough to convince them? Somehow, it seemed essential.

As time passed, more people joined us and passing drivers honked their horns in support. The rain drummed down, the press showed up with their spotlights, microphones and cameras and a gay vicar told us that god didn’t discriminate – he loves everyone. Try telling that to the twitchy mainstream churches.

Because gay marriage – or marriage equality to put it a better way – is not about religion. Marriage is not a religious entity, not since straight couples can get married very well in a civil ceremony, no church or flowing robes required. Rather, marriage is about two people who love each other coming together and proclaiming that love to their friends and family and celebrating it. Straight couples take this for granted; gay and lesbian couples have never had the opportunity even though their unions have been just as loving, just as committed. 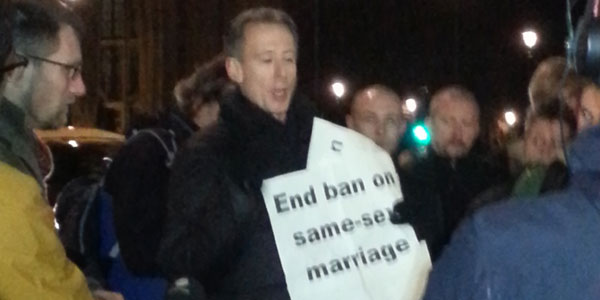 As six o’clock beckoned and I’d shaken hands with some Labour and Lib Dem campaigners, MPs started to drift over from parliament to paint the debate for us – it was Jackson Pollock apparently, all swirling emotion. The key message was that we would win. Then suddenly the rain picked up, the air swirled and gay rights activist Peter Tatchell appeared alongside Brighton’s Green Party MP Caroline Lucas. I felt giddy – Tatchell, with his outright bravery and selfless campaigning for gay rights has always been a hero of mine. He gave a rallying speech, then tickets into parliament were given out and I followed a congaline of excited same-sex marriage supporters into Westminster.

Through security, through a massive drafty stone hall, up some historic stairs and we were into the corridors of power. It wasn’t long before we were stood in the MPs’ lobby, the House of Commons to the left, the House of Lords to the right – you could taste the power in the air. It tasted sour. I kept walking and we were led into a wood-panelled room within spitting distance of the vote. Gathered were MPs, activists and bizarrely, me. It was a weird turn of events but there I was, about to witness history. 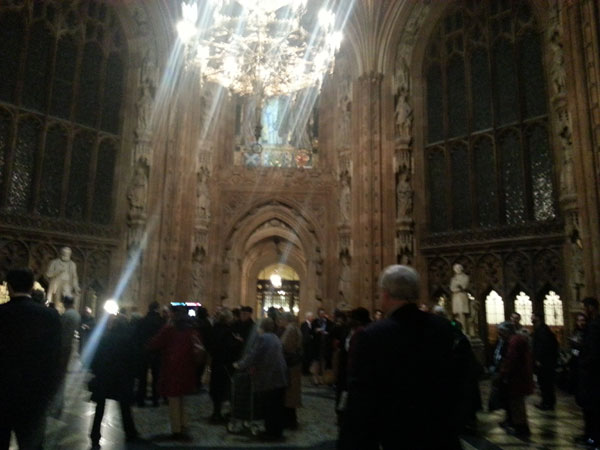 The vote bell rang and MPs scurried from the room to vote. We held our collective breath, Peter Tatchell filling the gaps with talk of equality. A TV screen in the corner of the room would tell us the result. We waited and stared. MPs came back to the room, telling us the aye lobby was packed – this was good news. The screen stayed blank.

And then. And then it flickered to life, telling us that parliament had passed the law by a majority of 2:1. Subject to it getting through the Lords, this would soon be law. Cheers rang out in the room. People clapped, people hugged, people stood around in disbelief. So many hours given over to lobbying and then – it happened. We won. I left soon after, kissing my new friends goodbye and stopping outside the Commons to breathe it all in. A mental snapshot and I was gone.

It was a night I’ll never forget, a night that means my girlfriend and I might soon be able to get married for real. No more always the bridesmaid, never the bride.