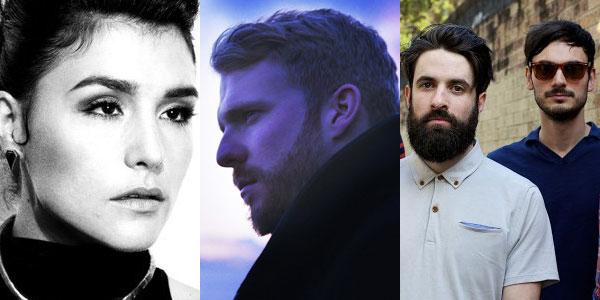 I love a great single. That moment when vocals and melody meet in mid-air, french kiss and roll around on the rug with not a care for who’s watching or listening. This year has been home to a few rocket-fuelled solo tracks from the likes of Gotye, Carly Rae Jepsen and Fun, but who’s romped to the top of the pile to take my coveted Top Track title? Read on my friend…

This quartet from Hackney slid into view in 2012 with this lucious dance anthem, bursting with gospel vocals and twitchy beats. Big things are expected from their forthcoming album this year, so expect more edgy, urban dance rattling your way soon.

House is the solo project of Adam Bainbridge, a long-haired lover from the UK. Lo-fi to point of invisibility, I love the chunky piano, scratchy vibes and huggy, clappy chorus on this. Makes you want to sit in a battered leather armchair, drink hot chocolate and think happy thoughts.

8 – Gotye – Somebody That I Used To Know

I’ve long been a fan of Gotye, naming his sophomore long-player Like Drawing Blood my Album of the Year back in 2008. His remit is simple: stitch together a patchwork of samples and see where it takes him. This breakthrough hit is one of Gotye’s more simple, stripped back mash-ups of recent times but it’s got all the key ingredients for success: build-up and crescendo of melody, hooky chorus and fantastically emotive lyrics. He’s a really top bloke, too.

There are some who will never quite forgive George for singing this at the Olympic Closing Ceremony concert, but I for one was grateful for a flash of today in amongst the retro-jamboree that was the rest. Sure, he did some dad-dancing and sure, he looked like he was on his way to the Blue Oyster Club, but focus on the music. Bowie’s comeback sounded his age, whereas George is still producing relevant, cool tracks like this.

His recent album Trilogy went on a bit, but in amongst it all was this, a shining nugget of fried gold in the rubble. Pain sparks off every note as Abel opines about a relationship that’s veered into the gutter. He brings his pain, we bring our love. Listen up.

Yowzers, what a year it was for fun. Just another NYC indie trio at the start, by the end they were playing to thousands of fans who’d snapped up their sophomore album Some Nights on the back of this uber-catchy single that tells the story of debauched life in the Big Apple. Singer Nate Ruess has a colossal voice and this is a blistering take on fun’s mission to be massive, cartoonish and theatrical.

Bringing experimental bleeps from the house-garage fringes, Disclosure scored a huge hit with this uplifting, hot hug of a track which is also in with a shout for Sexiest Video of the Year if I gave out such a gong, which I don’t. The duo behind it are brothers Guy and Howard Lawrence and next sees them teaming up with duo of the moment AlunaGeorge. Sexier bleeps on the horizon, then.

This track made me stop in my tracks when I first heard it, it’s fragile beauty and bewitching swell of piano lingering long after the music ends. Beardy singer Guy Connelly keeps the vocals feather-light and by the end you’re repeating the ‘oh-oh-oooh-oh-oh-ooooh’ refrain as you fall asleep. Gorgeous.

Call yourself Jessie and you have half a chance at succeeding in the pop world it seems, and so it proved for Jessie Ware who took 2012 by the ear and didn’t let go. Her album Devotion is chocabock with swoonsome tracks, but it was this first single that made us take notice, beautifully realised and sung with raw emotion. Even in your wildest moments, you can be the greatest you know.

Who would have thought that a ginger man with a flat cap and beard would win my Track of the Year, but win it he has. An awesome single from a great album, Too Close knocks out the competition comprehensively with its commercial dubstep roots, plaintive lyrics and explosive chorus. We’ve all been in this relationship haven’t we?

Taylor Swift – I Knew You Were Trouble & We Are Never Ever Getting Back Together – 2012 proved Taylor is the single-meister. Like, totes.

Childish Gambino – Firefly – The rest of his album was a bit of a let-down, but this single simply sings.

Kendrick Lemar – good kid. His whole album is a triumph, but this mid-track stands out with its smooth vibes. Surefire single, surely?

Amelia Lily – You Bring Me Joy. Who knew that the X Factor reject would land a contract with Girls Aloud supremos Xenomania and become the next chart-bothering blonde? Not me.

Nicki Minaj – Starships. This track took up residence in the top ten for the whole summer and made sure everybody wanted to go to the beach, beach and drink patron, patron.

Jess Mills – For My Sins. Playing catch-up to Ellie, Jessie, Emeli et al, we hope this year Jess gets the recognition she deserves. This track radiates class.

Ellie Goulding – Figure 8. “Breathe your smoke into my lungs…” sings Ellie, one of the best first lines of the year. Heart-breakingly beautiful.

Lana Del Rey – National Anthem. She may slice opinions, but the lady doth know how to create a swirling dervish of a single. A bit like this one.