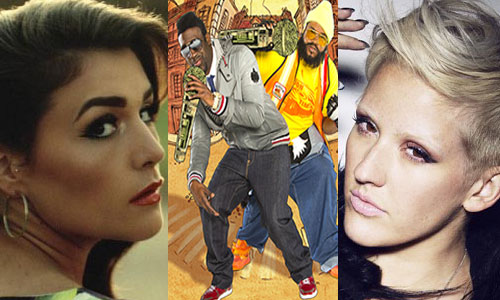 Farewell then, 2012. You brought us the London Olympics and the Queen’s Jubilee, which made us all feel royally fabulous. You were also a glittery disco ball of musical merriment, with a number of standout albums and more than enough pop fragments to snag our attention. Before you evaporate completely from our memory, let’s look back with no anger and more than a scoop of love. And before you ask, no there is no Frank Ocean in the list because while Channel Orange had its moments, it was terminally long and dare we say it, dull – not an accusation you level at any of this lot…

What is it about Fine Art students making great indie stars? Winners of this year’s Mercury Prize for An Awesome Wave, Alt-J burst onto the scene with some style in 2012. Their patchwork indie floated into our lives like an ear-dream – this album is awash with wonky notes along with earnest, searing vocals that leave their imprint on your psyche. If you haven’t already bought this, do catch up.

April was a miserable month, but then along came this raw, noisy blouse of an album, like an arrow through the incessant springtime drizzle. Lead singer Brittany Howard sings it true & blue, a real revelation on the mic, while her three hirsuit cohorts ably assist with the back-up musicality. It’s like four boys with guitars, only with a woman too. How revolutionary.

When you’re born Orlando Higginbottom, you might think that when pop stardom beckons, you’d change your name to something a little less, well, have-to-spell-it-out-able. Not this Orlando. Putting his electronic rhythms into specially named box, he shook it up and decided on Totally Enormous Extinct Dinosaurs – TEED to his mates. No matter though – the resulting debut album is choc-a-block with scorching house, not least the radio-friendly Household Goods and Tapes & Money. Remember his name.

7. Elton John Vs Pnau – Good Morning To The Night

Thought that Elton John had used up all his 70s magic dust? Think again. In 2011, he handed over some master tapes of archive recordings to Australian duo Pnau and together they agreed the twosome would come up with something new from the notes and vocals contained. However, even Elton must have been jolted awake by the resulting album, with his old work sliced, diced and presented back in a shiny case – gold stars all round. It’s Elton, but given a modern electro twist. Listen and weep.

Straight outta Compton, Kendrick Lamar started out in hip-hop supergroup Black Hippy before branching out on his own with debut section.80 in 2011. In 2012 though his star truly soared with the release of this second effort, his laidback, louche style connecting and sparking in one dynamic zapp. A rap album that details the trials and traumas of said good kid in a mad city, yes it’s a bit boasty in places as rappers tend to be, but it’s got rhythms, it’s got rhymes and it’s got style. Good kid done good.

5. Emeli Sande – Our Version Of Events

What a year 2012 was for Emeli Sande. Winner of the Brits Critics Choice Award, she kicked on from the really quite marvellous 2011 debut single Heaven to become the must-have vocalist at every massive-scale event – the Olympics opening and closing ceremonies and Sports Personality of the Year to name but a few. If Sande wasn’t there, the event wasn’t complete. Our Version Of Events was the only million-selling album of the year and it’s easy to see why, packed as it is with panoramically lush tunes and Emeli’s crystal clear vocals. When she’s not writing and performing her own hits, Emeli also finds time to pen them for others. A massive over-achiever, then.

Two Door (as they’re affectionately known) won my album of the year in 2011 with their eponymous debut –  so does their sophomore effort measure up? The answer is a categorical yes. Working on the maxim if it ain’t broke don’t fix it, Beacon takes off where their debut landed, packing the 39-minute journey full of guitar-led, poetic indie, bursting with intelligent lyrics, understated but razor-sharp melodies and Alex Trimble’s gorgeously mellow voice soaring throughout. It’s a definite grower, but this now has roots in my heart.

When I first heard that De La Soul were back last year, I swear I did a little wee of excitement. Everybody’s favourite old-skool hip-hop artists back in the groove? Hell, yeah! First Serve is a concept album that tells the tales of Deen and Jacob and the ups and downs of their lives. In doing so, it plunges you back to the early 80s with its rich and unmistakable sound – yes, this is hip-hop but with an added twist of theatre. With a clutch of standout tracks and an infectious vibe throughout it’s true what they say – they don’t make them like this anymore. More soon please.

When I first heard this album a few weeks before it was released, my ears prickled with excitement. Sensual and slick, Jessie Ware swept aside a slew of wannabes and rose to the top of the pile with her debut which is bursting with sultry, smooth soul-pop and infused with a dash of dance. Wildest Moments is a brilliant slice of pop that proved perfect for summertime Olympic montages, while Sweet Talk and its cohorts detail the agony of love with such perfection, you almost want to cry. Rather than do that though, I’ll start a slow hand-clap. Bravo Jessie, bravo.

If at the beginning of the year you’d have told me I would be making Ellie Goulding my album of the year, and I would have told you you’re howling mad. Isn’t she the one that did that soppy cover of Your Song and was Kate & Will’s wedding singer of choice? Well, yes to both, but this album sees Ellie maturing into an edgy artist of real note. Full of tribal drumbeats and flailing synths, Halcyon also feels like a meaty, old-fashioned album with songs to make you punch the air (Anything Could Happen), songs to marvel (Figure Eight) and songs to make you ponder (I Know You Care). She’s got a new haircut, she’s got a new edge and Halcyon is a musical and lyrical treat. Sit back and savour.

Taylor Swift – Red. A glorious slab of modern pop – even the Taylor-haters are having to sit up and take notice now aren’t they?

Lana Del Rey – Born To Die. If you want a textbook delivery of 50s musical glamour, she showed you how.

Nicki Minaj – Roman Reloaded. This was the year the starships learnt to fly, mo-fo. Potty-mouthed & proud.

Alex Clare – The Lateness Of The Hour. That cover of Prince’s When Doves Cry is worth the cover price alone. You are loved, Alex.

Bat For Lashes – The Haunted Man. Slick, lo-fi follow-up to her stupendouse opener and a prize for the freakiest album cover of the year to boot.