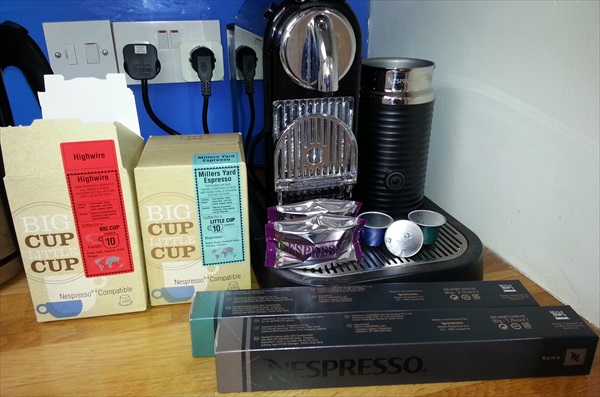 Everybody knows I love my Nespresso machine like my own child: I stroke it daily. A while back, Nestle’s patent for its Nespresso coffee capsules expired and a court ruled that it should stop being so greedy and let other companies manufacture them too. Cambridge-based Big Cup Little Cup did just that so I decided to try them. So would their pods taste of coffee? Would they enhance my Coffee Lifestyle ™? More importantly, would they look as pretty sat next to my machine? Let’s find out…

As I said in my initial Nespresso blog, having one of these machines has nothing to do with how the coffee tastes – just like most coffee in fact. Come on, Starbucks have built an empire on the fact that people want to pretend they’re starring in their very own episode of Friends. They don’t flock back for the coffee now do they? Similarly, when I got my Nespresso machine I felt like I’d arrived: it gleamed like an F1 car and suddenly, I was the Lewis Hamilton of the coffee circuit. So let’s take Big Cup Little Cup for a spin…

Unlike Nespresso’s aluminium capsules, BCLC favour plastic that fit perfectly in your machine. The downside of this is they’re not sleekly coloured and so don’t fit the Coffee Lifestyle ™. But, and it’s a big but – you can put plastic straight in your recycling unlike the Nespresso capsules which can hang around my house for weeks. So is it a winner? Yes for the environment, nope for chic.

A valiant effort but they were going to have to go some to beat the moody stylings of the originals which sit elegantly in colour-coded tubes just waiting to be loved. BCLC favour sunshine-coloured boxes on top of which every capsule inside comes in its own foil-fresh pouch which results in epic packaging overload. Just when they’d scored an environmental tick with the pod recycling too. 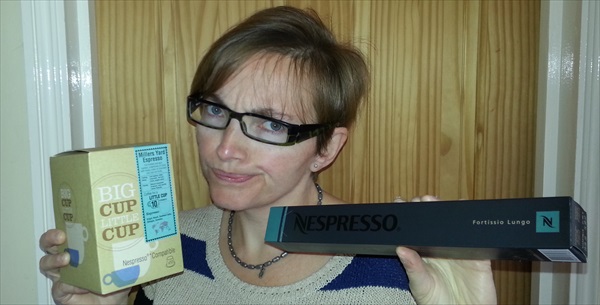 Nespresso set the bar pretentious with their Italian-themed grand crus (I’m not making this shit up): names like Fortissio, Aria, Roma and Ristretto. Uh-huh. BCLC have gone for more American-led monikers like Brazil Yellow Bourbon, El Salvador Honey Process and Homepark. They might win this round.

I tasted Highwire and Miller’s Yard Espresso, both a nuclear 10 on the BCLC scale as I like strong, chewy coffee in big cups. Both of these tasted like coffee so well done. Look, we’ve already discussed this: coffee’s not about the taste, okay? But both slotted straight into my Coffee Lifestyle ™ with aplomb.

Nespresso sells their capsules for 29p-35p a pop, while BCLC are cheaper ranging from 23p-28p depending on strength and quantity. So yes, you will save moolah.

In the end it all comes down to the sort of person you are. If you like the original mean and moody behemoth brand, stick with it. But if you’re a coffee tart and fancy flirting with a new & smaller suitor, give Big Cup Little Cup a go. Right, coffee time…