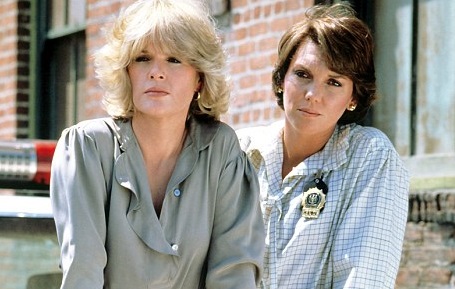 BBC2 has recently taken to filling its afternoon schedule with classics such as Are You Being Served, Allo Allo and most triumphantly the ground-breaking Cagney & Lacey. I hold Cagney & Lacey in high regard and my youth was studded with hours spent gawping at Mary-Beth and Christine racing after criminals, clutching their cool pistols and swishing their bouffant hair. But what does it really take to emulate these esteemed crime-fighting heroes? This week, I’ve mostly been watching Cagney & Lacey to find out…

New York City is a cold place to catch criminals so if you want to do a Cagney, plump for a sheepskin jacket; Lacey meanwhile favours woollen numbers buttoned up to her neck. They gotta be big enough to carry guns, roomy enough to strut.

Look, you don’t get to be no cop in Nu Yoik without having the requisite attitude, capiche? Caggers & Laggers are not broads to be messed with, even though the rest of the male cast try it regularly. They’re soon slapped down with a barbed look or razor-sharp comment. You can check out the spirit of C&L in the modern-day Scott & Bailey, simply Christine & Mary-Beth but with more rain and northern accents.

The first episode with Sharon Gless playing Christine Cagney aired in 1982 so we’re deep into hair-with-volume territory. The early years sees Mary-Beth with big & bad shiny locks while Caggers’ famed blonde bonce has been sprayed firmly into place, a tribute to 80s layers and scaffolded to perfection.

It’s Mary-Beth who’s most famed for her New York city accent: in the first episode I watched she was called to “a sit-choo-ashun in cwaaafeee shawp”. But if you do want to emulate Lacey, all you have to say is: “Ya wanna hot dawg Christine?” in your best NYC accent, then sit back to milk the applause.

Cagney & Lacey won 14 Emmys and produced almost 120 episodes before it wound up after 7 years on the job in 1988. If you want to be Cagney & Lacey even for just one day, make sure you keep up the stunning credentials. 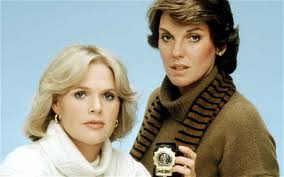 Did I mention that New York’s cold? Good. To emulate our heroes you’re going to need huge rollneck sweaters, Sarah Lund-style patterned affairs as well as jaunty geometric-laden knits. When it comes to woollen wardrobes, Cagney & Lacey have all bases covered.

When they’re not catching criminals or sorting our their personal lives, Cags & Lags love nothing more than practising their shooting on those unsuspecting cardboard targets. Maybe they thought it necessary or maybe it was their version of stress relief – this was in the days before pilates.

They may be tough-talking, street-fighting NYC cops but Detectives Lacey and Cagney never forgot to accessorise, as seen through their love of a slim belt, a casual heel and a hoop earring. Nothing sets off bouffant hair like a hoop earring.

If you want to emulate your heroes you’re going to have to chat about your personal lives: either moaning about your husband & kids or else slowly revealing your boozing & floozing antics. There’s a reason most people plump for Christine…

When not chatting, shooting, running or moaning, Cags & Lags were expert scowlers. Honestly, watch a few episodes and they spend at least 50% of them narrowing their eyes and fixing their face a certain way. Poor Harvey.

Like This? See more in my Popular Culture section or other Top Tens.