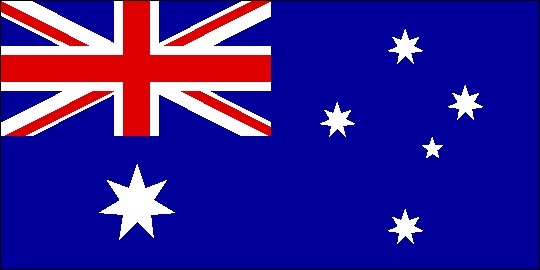 Yesterday was Australia Day: the 24 hours where our antipodean friends chuck their shrimps on their barbies, cram as many TimTams in their mouths as possible before showering in Toohey’s New. True story. For us poms however, Australia has a huge influence on our lives for the other 364 days of the year too via their television, their food & drink, their celebs and their culture. Oh, and Wanted Down Under. So today, let’s have a belated celebration of all things Aussie…

There are those who favour TimTams or Lamingtons. Those who’ll tell you that Anzac biscuits are da bomb or even Red Frogs. But the winner of the Aussie confectionery product of champions is the glorious Cherry Ripe. That mix of coconut, chocolate and cherry? Boom tings!

You very rarely see pictures of shivering Aussies do you? That’s because they’ve been watching the news about the polar vortex in the US and have no clue what it is. The only thing that falls out of their sky is dripping, honeyed sunshine. With the occasional cloud in Melbourne.

Every year, I think it’s incredibly generous of the Aussies to have their New Year early to get us all in the mood. “Midday kick-off? No worries mate! Means we’ll have that bit more time to party ay?” Aussie Aussie Aussie, Oi Oi Oi!

You know that image of koalas that everyone has? Cute, cuddly, adorable? Well, they are all that but they also smell of wee. Just so you know when you go to pick one up.

Everything I learnt about Australian culture I gleaned from either Neighbours or Home & Away. Who would know ‘Fair Dinkum’, ‘Bonzer’ or ‘Ya Great Galah’ without Alf Stewart? Where would you be without the influence of Charlene, Scott and most of all, Helen Daniels? In a worse place, that’s where. Perhaps the Bungle Bungles?

Australians take their cricket seriously – nobody more so than Warney. Shane’s recent journey from tubby Aussie brute to sleek metrosexual man has been a treat for all to witness as has his inspired commentary on Sky. Place your bets on what he’s going to look like in ten years time.

Scattered around the country are a trail of over-sized sculptures or objects with no point other than to be big things. A 52ft pineapple in Queensland. A 46ft koala in Victoria. A 43ft banana in Coffs Harbour, NSW. Australia doesn’t do small.

Aussies take their wine seriously, producing some 1.35 trillion bottles of wine every year. And not all of that is Jacob’s Creek apparently. You can rely on a good Aussie wine to be fruity, chewy and to smack you up the head. Ripper!

All hail Queen Kylie. She’s beaten off the twin terrors of breast cancer and Michael Hutchence but still come through producing stellar pop, wearing those hotpants and being a general beacon of Aussie virtue. We love Dannii too, but she’ll always be in Kylie’s shadow. Poor Dannii.

Like this? Check out more in my Top Tens Section.

Want to subscribe? Put your email address in the box on the top right to get every post delivered to your inbox. On a mobile, click on Home then scroll to the bottom to do the same!