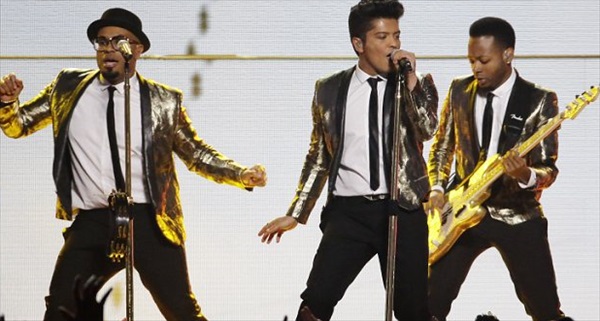 Bruno Mars played a starring role at last night’s Superbowl between the Seattle Seahawks and the Denver Broncos, wowing the crowd with his songs as well as his gold lame jacket. I interviewed him a little over three years ago when he was on the cusp of mega-fame, having just had his first No.1 with Just The Way You Are plus success with a bunch of other hit songs. He was a terrific interviewee, buzzed about life & full of energy despite being jetlagged. Here’s the interview from October 2010 where he talks about fame, his ambition and why freshly squeezed orange juice means you’ve made it…

Just The Way You Are looks like it might go back to No.1 this week in the UK after Matt Cardle sang it on X Factor this week – did you see it?

“Everyone’s talking about it! Someone sent me the link and it’s awesome.”

“I did – but really it’s just flattering to hear my little ditty on a show like that. I worked with Alexandra Burke and grew up with American Idol, so I know what it means. And what Simon said about me was great too.”

You wrote Just The Way You Are and B.o.B.’s Nothin’ On You and both view relationships in a positive light…

“I have four sisters and they’re always complaining that men don’t tell them the simple things. So just saying something truthful like other women have nothing on you is a cool thing to say and that’s why people are connecting with the songs.”

So your sisters are keeping you in check musically?

“They are – plus they have a ton more Facebook friends now!”

You also wrote another big song – Travie McCoy’s Billionaire. Tell me about that…

“I wrote it here in London. I was broke and got a job out here but it didn’t pay much and in the hotel we were staying at, an orange juice cost £10. We only had £250 to last ten days and everything is so expensive here – I couldn’t think straight because I was worried about the dollars in my pocket and I thought, ‘man, if I was a billionaire I wouldn’t have to worry about this!’.”

So how does it feel being a billionaire now?

But you can afford an orange juice now?

“I can afford freshly squeezed. That’s when you know you’ve made it.”

Billionaire’s been a huge song…

“It lights the place up on tour – it’s like a pub song isn’t it? It’s almost a cheap record, but it’s simple and to the point. People get it.”

You’re one third of The Smeezingtons production/songwriting team – are you planning on combining the two careers?

“I am – I want to wear a bunch of hats. Working with Cee-Lo who was one of my idols and writing a hit with him was amazing. But then playing a gig in Birmingham this week and them singing back my song to me was a great feeling too. I want all those feelings – I’m greedy.”

You’ve also performed on Saturday Night Live and Ellen recently– how was that?

“I love Ellen – she’s such a pro, everytime that camera’s on her she shines. When I sang Just The Way You Are on the show, I sang the last bit directly to her and got her on stage – that was pretty cool.”

You were born Peter Hernandez – how come Bruno Mars?

“My dad named me Bruno when I was two after a wrestler because I was a fat baby. People always think it’s a stage name, but no, it’s because I’m a fat wrestler.”

What did you do the first time you heard your song on the radio?

“It was kind of an out-of-body experience. I was in the car and Nothin’ On You came on and I had to check it wasn’t on my CD player. Then I cried like a baby. Only kidding.”

How many pairs of sunglasses do you own?

“Oh tons! I have a real thing for sunglasses.”

Do you get them sent to you?

“No, I buy them. That would be cool if that happened though wouldn’t it? I would feel like a jerk ringing someone up and requesting them though.”

What’s the most played song on your MP3 player at the moment?

“I really like Drake’s album – it’s good for relaxing.”

Finally, if you could be the love child of any two artists, who would you choose?

Has Jesus had many records out lately?

“You got to aim big though right? Okay, Sean Kingston and Fergie.”

Like this? Check out more in my Popular Culture Section or my Music Section.

Want to subscribe? Put your email address in the box on the top right to get every post delivered to your inbox. On a mobile, click on Home then scroll to the bottom to do the same!