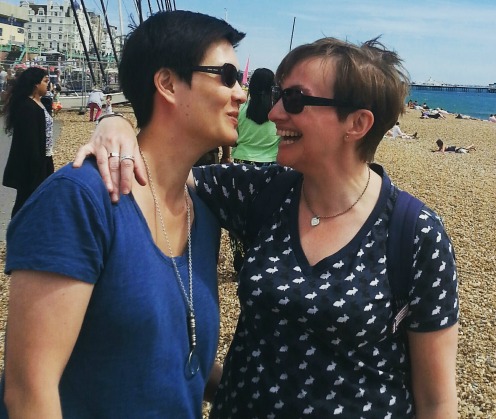 October 11th is National Coming Out Day – happy coming out day! All of which made me think about my coming out. About how scary it was and still can be; and about how it never ends, how life is an ever-rolling series of coming out to new people, who mostly assume my partner is a man. Can it get tiresome? Yes. Is it necessary? Absolutely. Here’s my coming out story…

I was still at university when I told my parents I was a lesbian. I was 21 and unbeknown to them, I had a girlfriend. But I knew it would be a shock for them. After all, when I had left home to start my degree two years earlier, I’d had a boyfriend. Not anymore.

But going home to tell my parents was beyond nerve-wracking. For a start, they’re old-school catholic, and from a very different generation. Did they even know anybody else who was gay? I didn’t think so.

But I’m one of eight children, which comes in handy sometimes. So before I told my parents, I told my siblings: they were all surprised, but not wholly shocked.  They were supportive, but they all understood how hard it would be to tell our parents: nobody wanted to trade places. My brother offered to come with me to tell them, but this was something I had to do on my own.

It was New Year’s Day and I was with my parents in the lounge where I’d grown up. Shockingly patterned carpet, check; burgundy sofa, check; lampshades with tassles on, check. I’d drunk around ten cups of tea, and was fidgety beyond belief: it’d all gone unnoticed. We’d just watched Match Of The Day, when I took the remote control and turned off the TV. That got their attention.

“So, I wanted to talk to you both,” I said. I probably blushed at this point, an annoying trait that still happens in situations of stress.

They both sat forward: my dad was next to me on the sofa, my mum on the two-seater opposite. They were both smiling: I was pretty sure it wouldn’t last.

“So you know you’ve always wanted me to be happy?”

Hesitant nods all round.

Now at this stage, I should point out my dad is slightly deaf in one ear. And that I was on his bad side. And it was because of this that he broke into a hesitant grin, moved towards me, put his arm around me and repeated back: “You’re engaged?!”

I should have checked he had his hearing aid on.

But tellingly, when I corrected him, he didn’t take his arm away.

My mum, on the other hand, wasn’t showing such a good reaction, glowering at me from the other sofa and asking me if I was just “jumping on the Boy George bandwagon?” Later in life, when I was a music journalist, I related this to Boy George when I interviewed him. “I had a bandwagon?” he asked, chuckling.

And so the deed was done. And no, it wasn’t plain sailing. That night, we sat in the lounge for another half an hour talking in stretched, jagged sentences, no road map for this particular stage of our lives. The next day, I went back to university, a weight lifted from my shoulders but future uncertainty replacing it. Nobody was jumping for joy, but I was glad they knew.

It took a few years for the dust to settle, and for both me and my parents to carve out our new roles; for them to meet a girlfriend, for us to start talking about it. Yes, there were some strained visits and car journeys in that time, but ultimately, they never stopped being my parents. Yes, they were shocked, but they got over it. And today, they welcome my wife into their home unconditionally. They love her because she’s a gorgeous person; that she cooks a mean lamb rack and has an extensive whisky collection also helps. They’ve even read one of my lesbian romance novels, a sentence I never thought I’d write.

The world has changed so much in 20 years, even I find it astounding. Heck, in 2014, I got married. How I’d love to go back to my 21-year-old self and tell her not to worry; that by her early 30s, she’s going to have met the one and be happy. She’d have probably pointed to the Tory government and section 28, telling me not to be so stupid. But my story does have a happy ending: my coming out was a little bumpy, but my family & friends love me and I have a wife who’s the love of my life. You can’t ask for much more.

However, I’m still aware that not every family is so accepting; not every culture will welcome their lesbian daughter, their gay son, their trans child, their queer offspring. I know, because I see the pain those close to me are still going through today: families that refuse to accept, that turn their back just because they don’t like who their child has chosen to love. I still find it baffling.

I’m hopeful for the next generation, though; I see the world changing, but I know it’s not the same around the whole planet. If you’re LGBTQ in huge swathes of the world, life’s not such a picnic. Which is why coming out and making yourself visible is so important. You might not be able to change the world, but you can change the world around you, and maybe I can show someone I meet that being a lesbian is just being a person: nothing more, nothing less.

I couldn’t not come out, because I can’t not be me. I knew 20 years ago that this wasn’t going to change and I know it today. I am who I am and I’m proud of who I am. Happy National Coming Out Day!