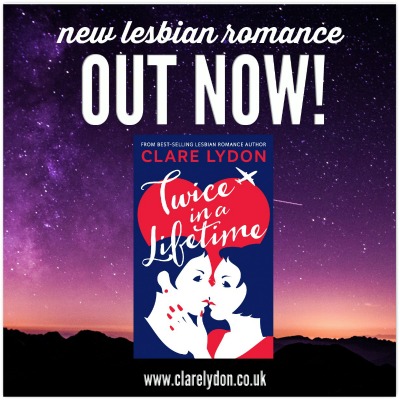 I’m beyond thrilled to let you know that Twice In A Lifetime is finally out – hurrah! I’m not sure I’m meant to say this, being the author, but I fucking LOVE this book. It’s dreamy & steamy in equal measure, and I miss the characters already. Let me tell you about writing it…

I had the germ of an idea for this novel a couple of years ago, but nothing more than that. I scribbled a couple of notes down, and kept it on the back-burner – but it was always there, waving in the distance.

And then this year, my wife and I took a trip to Chicago to visit a friend and suddenly – wham! The story idea came back and I knew I had to base this book in Chicago.

Now, some readers have said this is an odd decision, seeing as I am known for my British lesfic. But I’ve been harbouring an ambition to set a book in the USA for some time now. I always thought it would be New York as I love that city – but when I went to Chicago, I knew it had to be there. I could see where the characters would be drinking, meeting, loving and eating. The die was cast.

And then came the tricky bit. Because while the story flowed like a dream and the characters spoke to me loudly in my sleep (Aunt Paula in particular, natch), there was something niggling in the back of my mind. And that was: if my characters were born in the US and have American language nuance, do I have to spell in American, too?

My initial reaction was “NO!”, because frankly, I’m lazy by nature. Taking out the letter U, changing the letter S for the letter Z, making my double-ells, single ells? But then, the more I thought about it, the more I realised I’d have to do it. Because if a US reader picked up the book, read a US character doing US things and spelling in English, they’d think: ‘this woman’s illiterate’. So I decided to change to US spelling, too.

Would I do it again? You know what, right now it would be a breeze. I should write another AT THIS VERY MOMENT, while I’m in the zone. But really, my heart belongs to the UK, hence most of my books will be set there. But I totally wouldn’t rule it out because I do love many parts of America, and I’m due to visit Boston in June next year. Who knows, maybe I’ll base a book there?!

For now, though, I hope you read and enjoy Twice In A Lifetime as much as I enjoyed writing it. It’s a second-chance romance set in Chicago and New York, featuring Harriet and Sally, two former teenage lovers who meet again in their 30s. Will lightning strike twice, or will it be a case of once bitten, twice shy? If you love lesbian romance packed with wit, love & cocktails, this is the book for you!

Twice In A Lifetime is out now!