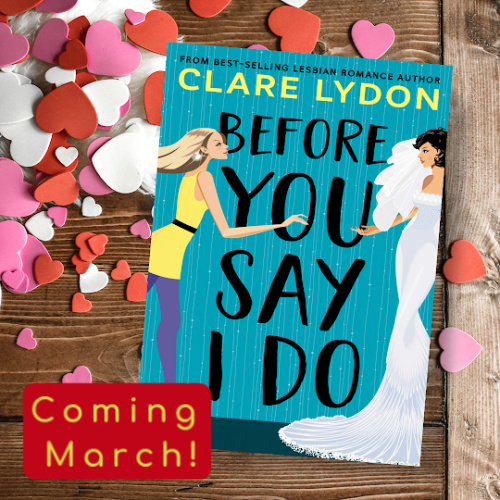 My new lesbian romance, Before You Say I Do, is due out on March 10th. It asks the question: what happens when you fall for your bridesmaid? Intrigued? You should be. Want to read the first chapter? Read on…

Before You Say I Do: Chapter One

Jordan Cohen shifted her left shoulder a fraction of an inch. Then another. She couldn’t risk moving any more. Dammit, this was such an inopportune moment to have an itch between her shoulder blades. Standing on an altar in front of 120 guests, as the professional bridesmaid to her latest client, Emily.

“Do you take Max to be your legally wedded husband?” The vicar ran through his spiel.

Jordan clutched her maid-of-honour flowers that little bit tighter as she waited for the words to fall from Emily’s mouth. The itch suddenly left her mind. This was more important. She gazed at the side of Emily’s perfectly styled hair, the bride’s round diamond earrings glinting in the church’s mottled sunlight. Even Emily couldn’t fuck this bit up, could she?

A few seconds ticked by.

Then a few more.

Someone in the church let out an ill-timed cough.

Jordan switched her gaze to Max, the groom. She knew he was thinking exactly the same.

Heat crept up Jordan’s back, then her neck. She stroked the back of Emily’s arm lightly with her fingertips.

“I do,” Jordan muttered, just loud enough for Emily to hear, but quiet enough that Max wouldn’t think Jordan wanted to marry him. That couldn’t be further from the truth. Emily and Max were perfect for each other. Not so much a love match, more a biological clock match.

Jordan scrunched her forehead and nodded towards Max, hoping this conveyed to Emily how much she really needed to answer this question. It was all part of the getting-married deal. Jordan had presumed Emily understood that. They’d practised walking, smiling, posing, and even breathing, but they’d glossed over the bit where Emily had to say “I do.” Now, Jordan could see that might have been an oversight.

Emily held her gaze, before turning back to Max and the vicar.

The vicar gave Emily an unsure smile, tilting his head to offer reassurance.

Opposite Emily, Max mouthed the words at her.

Finally, after a few more agonising seconds, Emily took a deep breath and opened her shiny pink lips. “I do,” she said, her voice ringing out loud and true. Almost like she meant it.

A collective exhalation of breath sounded from the wedding guests.

She’d done it. Got Emily to the altar, allayed her marriage fears, and kept her from drinking too much champagne while she had her make-up done. Emily had committed to Max. Which is what Emily’s family had tasked Jordan with doing four weeks earlier. Her fee for being Emily’s fake bridesmaid wasn’t reliant on getting her to the altar, but it certainly made the final invoice a hell of a lot easier to send.

“I now pronounce you husband and wife. You may kiss your bride!” the vicar said.

Jordan snapped back into the present. She slapped on a radiant smile for the camera, one that told the world this wedding had been a cinch. Then she swished her shoulder-length blond hair, stood up straight, and smoothed down her light green bridesmaid dress like it was the best thing she’d ever worn.

It wasn’t. It was shapeless and made her look like a stick of celery.

Jordan couldn’t wait to get it off, change into her jeans and head down to her local for a glass of sauvignon blanc with friends.

However, that was still in the future. At least eight hours away. First, she had to get through the wedding dinner, the speeches, and the dancing. But at least the end was in sight.

As Max leaned forward and took Emily’s face in his hands, Jordan allowed herself a proper smile. Sure, she might be cynical when it came to love, but this part always filled her with hope. Marriage was the start of something, a blank page in a relationship. Even for Emily and Max.

The happy couple kissed, and the wedding guests clapped their approval. Jordan glanced across at the best man, Rob, who gave her a dazzling smile. She hadn’t met Rob before, which was unusual. Perhaps he was a professional best man, too. Max had told her that Rob was looking forward to escorting her down the aisle and accompanying her on the dance floor later, as was tradition. As Rob’s smile turned into a suggestive wink, Jordan kept her smile fixed in place. Inside, her heart rolled its eyes.

Now she had another thing to add to her to-do list.

First, make sure Emily didn’t get so drunk she fell on her face.

Second, charm the pants off the bride’s dad, who was paying her bill. He might even give her a tip if she played her cards right.

Third, tell the best man he was very much barking up the wrong tree.

Jordan swung her beat-up Ford Capri into the space in front of her Brighton flat and shut off the engine. She sat for a few long moments, the only sound the roar of a passing quartet of pub-goers, who’d just left The Rusty Bucket, her local. She opened her handbag and fingered the crisp notes the bride’s father had pressed into her hand when she’d left. A thousand-pound tip from him. A snotty, drunk hug from the bride that had left a stain on her dress; and a sigh of resignation from the best man as he realised his normally winning smile wasn’t going to cash in this time.

A bang on her car roof made Jordan jump. She turned so fast, her neck did that popping thing at the base. An arrow of pain surged to her brain. She winced as her best friend and flatmate Karen grinned at her through the passenger-side window. She was making a winding motion with her hand, almost as if Jordan’s car didn’t have electric windows. Which it didn’t.

Jordan leaned over, her face still furrowed after her neck spasm. She grasped the window winder and gave it a few turns. The sound it made could never be described as healthy.

Karen’s mouth turned up at the sides before she spoke. “Hello, flatmate who I haven’t seen all week. Question: why are you sitting in your car like a weirdo?”

“Because I am a weirdo?”

“That’s a given.” Her friend leaned in further, both hands resting on the Capri’s half-down window.

Jordan eyed it, hoping she didn’t lean too hard. Her car was a piece of living history, and as such, needed handling with care.

“Because it just did that weird popping thing.”

Karen tilted her head. “It’s because you work too hard and therefore your body is too tense. You need to relaaaaaaaaax.” As she said the last word, Karen moved her head dreamily, as if she’d never had a neck spasm in her life. “So did you marry off another rich schmuck today?”

“My mission was completed without a hiccup.” Jordan rolled her neck tentatively. No pain. She thought back to Emily’s meltdown just before the service. How she’d mopped it up, and then reassured Emily her marriage would survive.

Jordan had been in the job too long.

Platitudes and lies fell from her lips like confetti.

“If it helps any, you look gorgeous in your dress.” Karen’s gaze rolled down Jordan’s body. “When I say gorgeous, I mean like a weird green streak. What even is that colour? Celery chic? I particularly love the flower in your hair.”

Jordan ripped the flower from her head. She’d been in such a hurry to get home, she’d forgotten to take it out.

Karen gave her a cocky grin. “Get changed, and come down the Bucket. I’ll buy you a drink. And you never know, the woman of your dreams might be waiting tonight.”

That made Jordan smile. “Because there’s always such a glut of good-looking lesbians in the Bucket.” She checked her watch. 9pm. She’d been working since 7am. No wonder she was tired.

“No looking at your watch and coming up with excuses. I haven’t seen you in the past month because you’ve been getting Emily and Max married. Now it’s done, it’s time to relax.” Karen straightened up, then gave the roof two quick slaps.

“Hey!” Jordan shouted. How many times had she told Karen not to do that?

Karen’s face came back into view, her hands resting on the window again.

Karen stepped back, holding Jordan’s gaze. “If only you loved me as much as you love this car.” She cocked her head. “Do me a favour and do as you’re told. Come and have a drink with me. You need to be reminded of real life and your real friends. Not the weird make-believe world you inhabit when you’re hired as a rich person’s bridesmaid.”

Jordan took a deep breath, then gave her a nod. “Okay. Give me 15 minutes and I’ll see you in the bar. Get me a wine. The largest one they sell.”

Karen grinned. “That’s my girl.” She banged the roof again before she walked off down the road towards the pub, and turned to give Jordan a wave.

Jordan grabbed her phone from her bag on the passenger seat, then pressed the green button. It lit up. She had a new email. She should leave it until tomorrow, go home, then get down the pub. But she never did. Being your own boss meant you were always on. She opened the email.

Jordan stared at the photo pasted into the top of the email. Whoever this was, she was the definition of a beautiful woman.

Jordan’s eyes scanned down the email for a name to match to the face. Abby Porter. 36 years old. Engaged to Marcus Montgomery. Jordan tried to sit up straighter, but her bridesmaid dress had too much material and it caught around the seat belt. Stupid bloody dress. The sooner she got out of it, the better.

Jordan clicked on the light above the dashboard and stared at the email again.

Abby Porter had long, lustrous dark hair, and a rich, hazelnut stare. Her cheekbones were striking, as was the way she angled her head. As if to say ‘fuck you’ to the world. She didn’t look like she wanted to sing and dance about getting married to Marcus. But then, this looked like a professional shot, probably done before Marcus proposed. A work shot, perhaps. If Jordan had to guess, she’d say Abby was something in marketing. Probably a brand manager, or department head. Abby Porter looked like she knew what she wanted, and she normally got it.

Did Abby want to marry Marcus? Jordan didn’t know, and it wasn’t her job to know.

Her job was to make the experience of getting married as smooth as possible for the bride. This email stated that Abby would like her help, and wanted to meet to talk more. Could Jordan give her a call at her convenience?

Jordan took one more look into Abby’s cool, alluring stare, before throwing her phone in her bag. Sure, she could do that. But not tonight.

Tonight, she had some soothing adult grape juice to drink, and a best friend to appease.

For now, Abby could wait.

Before You Say I Do is out on March 10th.