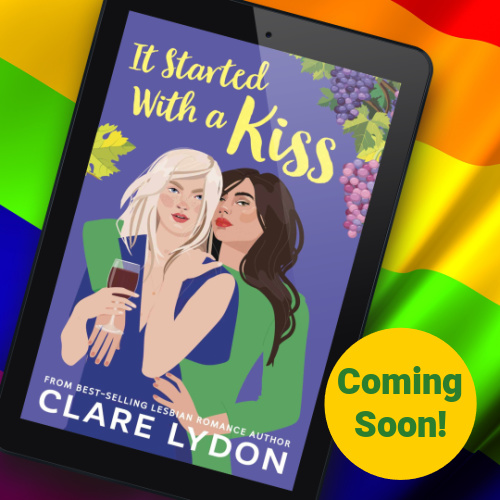 My brand-new sapphic romance, It Started With A Kiss, is out in June. This new one is set in a UK countryside vineyard, so expect wine and sunshine alongside sizzling attraction. If you can’t wait until June and fancy reading the first chapter before then, you’ll find it below. I hope you enjoy the sneak-peek!

Annie. The receptionist at the Seasalter Hotel was the first person Skye saw when she entered the lobby. Today, she was the acid test. How far had the news spread? Did Annie know?

Skye tried a smile, but it was half-baked. A little like the banana bread she’d attempted a few months back.

She’d contemplated calling in sick, but decided that was simply putting off the inevitable. She’d have to face people eventually. Instead, she took a deep breath and decided to get it over with.

“You look knackered.” Annie tamped down her curly hair, which was well ruffled by her seafront walk to work.

She gave Skye a sympathetic smile.

“I didn’t sleep well.” Not a surprise given yesterday’s news. Skye had found out just as she was dropping off to sleep, thanks to a text from her friend Justin that had lit up her phone.

Whatever you do, DON’T look at your Facebook right now, he’d messaged just before midnight.

So of course, Skye had to look.

“I saw it this morning, gotta be rough.” Annie shook her head and pursed her lips. “I would offer to go out with you later to rip her to shreds over a glass of wine, but I’ve got a spin class.” Annie had priorities. Also, some dried toothpaste on the corner of her mouth. She leaned in, her cheeks sun-kissed from her recent bargain weekend to Valencia. “Just know, I’m on your side. Everyone is. What she did was not okay.”

That was one way to put it.

“Thanks.” Skye’s bum cheeks clenched. Her shoulders stiffened. Was this going to happen with everyone she met this morning? Maybe she should have stayed in bed.

She gestured to Annie’s toothpaste, and her colleague grabbed her compact from her desk drawer and gave an embarrassed smile. Skye left Annie wiping her mouth, and slipped along the sleek hallway of the Seasalter Hotel, St Austin’s most upmarket place to stay. She breathed in the smell of fresh polish on the parquet floor, mingling with the fresh flowers on the hallway tables. At the end she turned right into the main office. She was the first one in, like always.

Skye sunk into her padded black office chair and spun around. She stopped mid-spin, and stared out her window, at the golden sands beyond, lapped by the crisp waves of the Atlantic that stretched as far as she could see. This view could normally be counted on to make her smile, but not today.

Not after the fall out of the past year. Not after last night’s announcement.

She spun around to her screen and turned on her laptop.

She had 12 new emails overnight. One from the hotel owner, Mr Cooper, detailing a new wedding for the hotel diary. Eighty guests, platinum wedding package, hotel DJ to be included. And then at the bottom, a line in bold:

50% discount to be applied for head chef, Amanda Cross.

Skye’s stomach fell to the floor like an anchor. She narrowed her gaze. Hell to the fucking no. Not on her watch.

She couldn’t stay here today. She checked the rotas. Amanda was due in at 3pm, and she couldn’t risk coming face to face with her entitled, smug face. Yes, Skye’s office view might be stunning, and yes, she’d loved her job until her personal life exploded all over it. But she was the hotel manager, so she could make the rules.

There was a line, and Skye had just drawn hers.

There was no way in hell she was playing any part in booking or organising a wedding for her cheating ex-wife, Amanda.

Skye contemplated going direct to Beer on the Beach after she got the news, but doing so would mean Amanda had won. She’d done enough of that over the past year since they split. Instead, Skye went to the gym and took it out on a punch bag, then jumped on a bike and cycled until her legs shouted at her.

Now it was 6pm, which was a respectable time for dinner and a glass of red. She licked a smudge of ketchup from her index finger as she finished her cheeseburger and chips, then took a sip of her shiraz. Behind the bar, Justin buffed up a champagne glass, but never took his eyes off her.

“What are you going to do about the wedding? Refuse to do it?” He put the glass on the shelf behind him, patted his sandy hair in the mirror, then turned back, a hand on his hip. “Better yet, you could do it, but drop a vat of chili flakes in the prawn cocktails, then piss in the chicken fricassee.”

“I’m not that obvious.” Skye hadn’t decided what she would do. But as the day wore on, she was coming to the conclusion she needed a new job. However, that brought her back to the same argument she’d been having with herself for the past year. She wasn’t the one who’d cheated and broken up a marriage, so why should she be the one to find a new job?

“Maybe you should be. If Marion did that to me, I’m not sure my revenge would be a dish served cold.”

Skye pushed away her plate and Justin cleared it from the bar. She stretched out her arms and glanced around the space. Two groups of friends sat by the large windows overlooking the ocean, but other than that, the bar was empty. Give it a couple of months and that would all change. However, it was still only the final week of February, so the tourists hadn’t arrived.

Outside, a brunette in a black trench coat paused at the glass front door and peered in. After a few seconds hesitation, she walked in. Her shiny black heels caught Skye’s attention, mainly because she was always impressed by women who just casually walked in heels like it was no big deal. It always had been for her. The woman took off her coat and hung it on the hook under the bar, along with her expensive-looking handbag. She hopped onto the bar stool two down from Skye, then gave her a hesitant smile.

She looked like the type who baked banana bread with ease. Someone who not only liked yoga, but probably had a favourite type. Perhaps hatha. Or the hot one. Or was hatha the hot one?

Justin approached her, and the woman wriggled on her stool, then dialled up her smile. She ordered a bottle, “give me something local, ale or beer, your choice”, then pulled down the cuffs of her sharp black shirt, creases still intact, that told Skye it was fresh out of the packet. What had brought her into this bar tonight? The woman’s floral perfume wafted along the bar and settled in Skye’s nose.

Justin delivered the woman’s beer, then sauntered back to Skye.

“When did my life get so complicated?” Skye swung her attention back to her friend. “Was it when she told me she really wanted a goatskin rug for the lounge, and I told her no?”

Justin raised an eyebrow. “A goatskin rug? That’s a thing?”

“A smelly thing,” the new woman added, then took a swig of her beer.

Skye had expected the woman to ask for a glass, but no. She was drinking it straight from the bottle.

The woman held up a well-manicured hand. “Sorry for butting in, but I couldn’t help overhearing. My cousin got a goatskin rug, and it was the singular most anti-social thing he ever did.”

Skye threw up both hands. “You see, I knew I was right to stand my ground.” She smiled at the woman. “Thank you.”

“You’re welcome.” The woman leaned towards her. “I promise, I won’t interrupt anymore.”

“Careful, I take people at their word.” The woman shifted her drink and herself to the adjacent bar stool, then held out a hand. “I’m Gemma.”

Skye shook it, thrilled to have someone else to focus on tonight. Especially someone with such smooth, strong hands.

“Skye,” she replied. “And this is Justin, barman extraordinaire.”

She took in the woman’s high cheekbones, and her deep green eyes. Something about her pinged Skye’s gaydar, but then, Skye’s gaydar was legendary for being faulty. Tonight, it was probably all sorts of wrong, because she was hardly in the best place herself, was she?

If she had to describe herself in a dating profile – she’d set up a profile after her friend Lauren bullied her into it, but it was still totally blank – it would say something like ‘divorced, morose, prone to spiralling’. She needed to work on her wording.

Gemma did not look like she spiralled at all. If Skye had to guess, she’d say yoga lady was having a drink to unwind before heading home to have dinner with her wife or husband. She’d probably have sushi delivered on a motorbike, because there was no way she was cooking. Maybe she lived in one of the larger towns in the area. Perhaps Newquay. Maybe she’d come to Cornwall in search of a simpler, more idyllic life, just as Skye had. It hadn’t turned out that way, though.

Justin gave Gemma a salute. “I’m here to serve the beer and sort out your life problems. Consider me not only a bar owner, but also a life coach.”

“All the best bar staff are.” Gemma grabbed a beer mat from the stack on the bar, then put her beer on it. She turned to Skye.

“Stop me if I’m completely out of line, but who wanted the goatskin rug?”

Skye stared at this stranger asking personal questions. Did she really want to open up to someone she didn’t know at all? Then again, she’d just been talking to Justin about it. Maybe a stranger would be the perfect person. Someone who didn’t know Skye, Amanda, or anyone connected to either of them. Someone who’d never been to the Seasalter Hotel.

“My ex-wife, Amanda. Who cheated on me with her sous chef, broke up our marriage, and is just about to get married again.” When she said it out loud, it sounded just as bad as it was.

Justin rested an elbow on the bar in front of them. “And now said ex-wife has booked the hotel that Skye works at for her wedding and reception, and Skye’s boss is demanding Skye organise it.”

Skye had never been able to do that. Impressed didn’t cover it.

“Holy wedding catastrophe!” Gemma shook her head. “There was me thinking small seaside towns looked relaxing to live in.”

Gemma raised a single eyebrow. “Seeing as we’re all friends, let me buy you a drink to let you know that not all women are bad. Also, to tell you, you were so right on the goatskin rug. You had a lucky escape. The rug would have ruined your life. It sounds like your ex already did a good job of that herself.”

It Started With A Kiss is out on June 14th. Read the full blurb here!