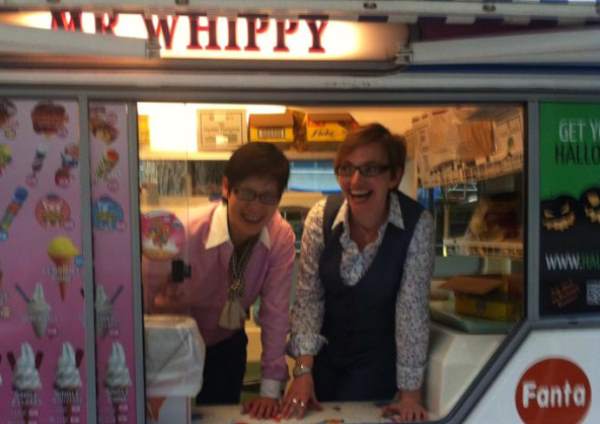 I don’t know if I mentioned it, but I recently got married. Yes, after months of preparation, a few belated weeks of stress and last-minute panic-buying from Poundland (no expense spared), it finally happened. Family and friends flew in from all corners of the globe and the country, I slept the night before, reminding myself to say I do and squeezed my eyes tight shut, hoping for no rain. Sure enough, when I woke up the sun shone bright with temperatures topping 80 degrees. Clearly, god loves the gays…

Before the event, I’d been a little worried. But on the day, both myself and my partner were strangely calm. Zen-like, even. We woke up with time to spare, breakfasted in our hotel and watched some Saturday Kitchen. We fought at the sink to do our make-up (a truly bizarre moment), posed for photography and smiled our best smiles as we headed to the taxi and the registry office. As we stepped outside the St Pancras Renaissance hotel, the sun blazed down on London Town and all around us was a sea of Arsenal and Hull City fans on their way to the FA Cup Final. It was to be Arsenal’s day as well as ours.

We spilled out of the cab and onto the baking concourse outside Islington town hall to be greeted by friends and family ready to witness and celebrate, nerves starting to jangle but under control. We kissed, we hugged, we jigged on the balls of our feet. We were ready.

The guests went in and we were interviewed by the registrars backstage – then it was showtime. We walked down the corridor – breathing in, breathing out – straightened our lapel flowers and tugged down our jackets. The moment of truth had arrived.

As Nina Simone’s Feeling Good reached its big band chorus, the doors swung open and we began our walk down the aisle. We’d practised doing this to the beat but I completely forgot and went charging ahead. A gentle tug on my hand pulled me back and I grinned at my partner. It was surreal. Friends and family surrounded us in a circle, wreathed in smiles and finery. Sunshine dappled the walls. We stood in front of our two oversized chairs as the congregation sat and our am-dram-schooled celebrant began, talking of promises, lifetimes, joy, love. I felt it in my fingers and in my toes.

We made our promises, said I do, then it was time for a couple of readings, including a poem I’d written to sum up our relationship (with the aid of song lyrics). Flip to the end to read it in full.

We exchanged rings, grinned at each other, and miraculously our celebrant declared we were an officially married couple. We kissed and bowed, while clapping and cheering ensued. Elvis Costello’s She played as we signed the register, my hand shaking even if my voice was calm. We were presented with our marriage certificate and then Madonna’s Cherish boomed out and we walked down the aisle to more cheers, whistles and a spat of dancing. 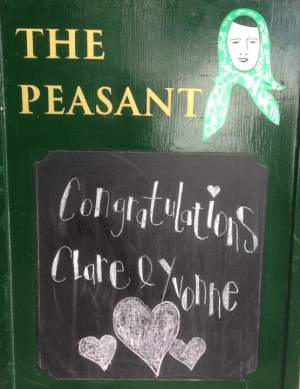 The rest of the day passed by in a beautiful blur. We had a double decker bus take us to The Peasant pub for our fantastic reception. Glasses of prosecco fizzed while home-made scotch eggs and tarts went down a storm. More photographs, then a delicious three-course meal with wine, speeches, a quiz and relentless sunshine both inside and out. Then we drank, chatted and ate ice creams in the evening sun from our specially hired Mr Whippy van before the karaoke & disco kicked in and the party revved into full swing. By 1am, the last party-goers were kicked out with a goody bag, replete with headache pills for the morning.

It truly was a special day, made so by all our gorgeous guests who came to share our celebration. Plus, it had extra poignance for me: growing up gay in the 1980s I never in my wildest dreams thought I would one day be able to get married. However, now that I am, I’m overjoyed to be so. After all, it’s not every day you marry the love of your life now is it?

Our first meeting wasn’t planned, we stumbled into it.

We were thrown together, black vinyl seating and scratched wood.

We conceded this might be what we’d been watching for

Hanging on the telephone for. Sitting on the dock of the bay for.

But eventually we collided, hands warm, face down, a little respect, a love supreme.

We stared into the vast beyond together

We wanted to shake the snow globe, have it foretell our destiny.

But love wasn’t in charge of our fast car. Only we were.

So we lived like kings & queens, even though we’ll never be royals.

We took each other’s hands because we seemed to understand the urgency.

Eventually, time trickled down through the mousetrap of our lives

Yanking love along the way, along with friendship, warmth & empathy

Before we knew it, we were bonded, cemented, into the groove.

The less we sought our souls for some definitive, the closer we were to fine.

We thought we were in charge, we thought this was our time. We were right.

We are each other’s wonderwall, the music does sound better with you,

You to me are everything, but it’s not all about you. It’s all about us.

When we flipped the coin it fell love side up.

Turns out we didn’t have a choice. Love chose us.