Farewell then, 2015. You’ve been immense. If I had to describe you in three words, I’d say challenging, rewarding and fattening (the life of a writer doesn’t involve a whole lot of moving). But I’ve learned so much, sold a stack of lesbian romance books and I plan to build and grow on that success in the coming year. 2015 was the year I started to take writing seriously. In doing so, I guaranteed that 2015 was without a doubt my busiest year yet. And being busy means you learn stuff – stuff like this…

I know everyone thinks this, but honestly, she really is. Living with a writer is no easy task. We constantly doubt ourselves. We spend most of our working day thinking everything we do is terrible. And we don’t have colleagues to chat with and get affirmation from, so when my wife comes through the door, she has to juggle the roles of wife, life coach, workmate and cheerleader all in one. I wasn’t a full-time writer when we met, but now I am, my wife has taken all the changes in her stride. On top of that, she’s gorgeous too, so I double-win at life.

9. Scrivener is a close second.

Nothing has changed my writing life more than Scrivener. If you don’t know what it is, it’s a writing program that enables you to jump around your manuscript at will, keeps notes and most importantly, turn your novels into ebooks at the click of a button. Scrivener has made my life so much better. Apart from the morning it ate This London Love the day before I was due to release. That wasn’t pretty.

8. I learned to do forecasting & spreadsheets.

Spreadsheets have always been alien to me. Even when I used to work in Corporate World ™, I treated them with suspicion. Now, however, I’m using spreadsheets on a monthly basis, forecasting my income and keeping track of book sales. And these days when I open a spreadsheet, I’m excited to see what it might contain. Somewhere, buried deep down, it turns out I have a shred of a business brain.

7. I heart podcasts: both listening & hosting.

This year, I got into my stride presenting my Lesbian Book Club podcast (hosted on the Lesbian Lounge), interviewing a ton of great authors and learning so much in the process. Hosting the podcast is a genuine honour, and it’s fantastic to interview so many fantastic authors, all of whom have been inspirational – I hope listeners have enjoyed it as much as I have. I’ve also begun listening to tons of new podcasts to keep up with all things writing & lesbian, as well as using them as life motivators. I’ve been a lifelong radio fan, and podcasts are radio on steroids.

This year, I bought two online courses to learn more about writing and Facebook ads, and got given two courses to do on the business side of writing. I’ve completed precisely four hours of the 50 hours of courses I have. It’s not that I don’t like learning from these courses – what I’ve done so far, I’ve absolutely loved. I just haven’t done enough of it. Putting more emphasis on learning is something I’m going to get better at in 2016. 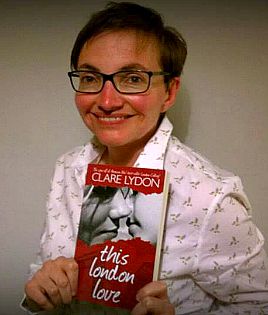 5. Book-selling is a global game.

My lesbian romance books sell mainly in the UK & US, major European countries like Germany, France and Spain, as well as Australia and Canada. But this year, I’ve seen my books branching out, scoring sales in countries further afield – the likes of Malaysia, Indonesia, India and Mexico. I love thinking of someone in Malaysia reading my books – how cool is that? I’ve also got my novels into libraries in the US, and have a fan in Nashville who’s borrowed all my books from the Nashville public library, one by one. Being a huge fan of country music, I’m hoping it was Rayna James.

I’m really going to try to get better at these this year. Every single book, I struggle with titles and hardly ever come up with them till the last minute – the one exception was All I Want For Christmas, which was nailed down pretty quickly. Being a former magazine editor, titles should come easy to me, but they don’t. Time to start eating dictionaries for breakfast and pun books for lunch.

This isn’t particularly news, as anybody who’s seen me at a karaoke night will attest to. In 2015, I compered the Literature Tent at Brighton Pride which was all sorts of brilliant; I also hosted the Indie Author Panel at the wonderful LFest; and I read at London’s swanky Polari LGBT Literature Salon. In 2016, I hope to be lucky enough to get behind the mic as much all over again.

In 2015 I released two new romances: This London Love and All I Want For Christmas. I released two books in 2014 too, but I had already completed first drafts of those the year before. But this year,  I wrote two books from scratch and released them, something I’ve never done before. It was challenging and rewarding in equal measure, but I hit my deadlines, something I’m really proud of.

1. If I can do that, maybe this year I can try for three or more?

Why not? This year, I plan on writing a number of stories including a third book in the London series, a follow-up to All I Want For Christmas, and a whole new series which I’ve already got a good start on. So the aim is to shoot for the stars and see where I land: hopefully somewhere in the gorgeous realm that is Planet Lesfic.

If 2014 was the year of romance (I got married!) and surprise at the success of my debut, 2015 has been the year of turning my writing into a business and trying to quicken up my writing process. It’s been a year of upheaval, challenge and stress, but it’s also been majorly rewarding. And now I’ve done a full year as a writer, there’s no excuse not to do it again – but this time, do it better.

If you bought one of my books this year, left me a review, sent me a message on social media or told your mate about me, thanks so much. Your support means the world and I literally wouldn’t be writing without it. I hope you’ll follow my journey in 2016 too.

I’ll be back in January to share my goals for the coming year. But they mainly involve write, release, repeat. 2016, I’m coming for you! See you on the other side.