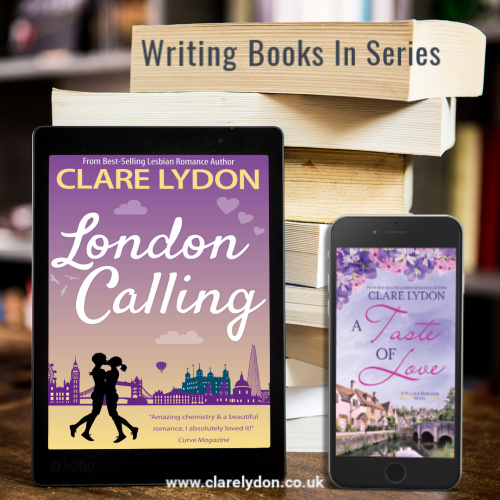 Series are hot. Everyone wants to write one. Series get readers invested in your writing. They also provide an obvious book path for readers to follow. So should you write one? Here are 12 things to consider…

1 – Know you’re writing a series from the start. I did not know this when I started either my London Romance series or my All I Want series. I penned follow-ups to the original books after readers wanted to know more. Sometimes this is a good idea, sometimes it’s not. It’s better to think about the idea initially and decide if your story is a standalone or part of a series from the get-go. You should always make that decision, because you’re the one who’s going to be writing it.

2 – Each book in a series needs to be a standalone story, but also fit into the overall universe. Make sure each story complements the other, and that you always have returning characters performing cameos throughout. There’s nothing I love more as a reader or a writer than dropping in a much-loved character from a previous story into a new book. It fills me with warm, glossy sunshine.

3 – Have a theme that runs through your series. For the London Romance series, it was the city they’re based in, along with romance. For the All I Want series, the theme was seasons. Your theme could be a workplace, a street, a country or even a different universe. Just decide on one, and make sure it’s a feature of every book in the series.

4 – Have unifying titles. I did this in both my solo series. For the Village Romance series, which I co-wrote with Harper Bliss and TB Markinson, we used the same word order: A Shot At Love, A Taste Of Love, A Lesson In Love. Unifying titles means that readers can tell at a glance the book’s in a certain series. Which brings us onto…

5 – …Covers. They should also be unifying, too. When I first began my London Romance series, I had covers that were totally different. After book 3, I commissioned new covers and now the series is a cohesive whole and looks great. It also makes future covers easy to design as the template is set in stone. Pay attention to covers. People might say they don’t judge a book by its cover. People lie.

6 – Make sure your lead characters in every book are likable and relatable. If a lead character from a story isn’t loved, readers will be put off continuing with the series. You can go to town with your secondary characters, inject them with humour and funny quirks. But your lead should always be an everywoman who readers can slip into the shoes of with consummate ease.

7 – If you’re feeling in a bit of a rut with your series, freshen it up by adding a new character or two. Nothing puts more life on the page than a new face to interact with. Particularly if he or she is going to present obstacles to your lead. The more times your main characters trip up and recover, the more your reader will keep turning the page and willing them to succeed.

8 – Put Easter eggs in your books for fans of the series – they will love them. In London Calling and This London Love, lead character Kate has a bike she keeps near the front door. Every time someone comes in or out, she’s always telling them to “mind the bike!”. In Made In London, lead character Heidi drops off her child for Kate to babysit. As she walks in the door, Kate says “mind the bike!”. I loved writing that wink to the first couple of books, and I’m sure series’ fans loved reading it, too. Pepper your books with little moments like this. You’ll love writing them and fans will adore them as it makes them feel part of an exclusive club.

9 – Have a series bible. Trust me on this. You won’t remember where people live, their eye colour, what they do, or who their mum is. To save you having to read back through all your books to find out all these facts, every time you finish a book, update your series spreadsheet. Then all the details you need to carry on the series are at your fingertips. You’ll thank me later.

10 – Put your series into boxsets. This gives your readers another way to buy them. Offer a discount to buying the books separately, too. I have my London Romance series and my All I Want series in boxsets 1-3, 4-6 and 1-6. The more books in the set, the bigger the discount. If you want to generate more interest in your series, you can also drop the price of book one to get readers invested in your series for a steal.

11 – Play it safe. If you’re indie publishing and trying to make this work as a career, you need to make money from your series. Start off by writing a trilogy. If you can, release the books fairly close together. A few weeks apart is ideal. I spaced my All I Want books out over the seasons, releasing six in a year. If you release a trilogy and it sells well, write some more. If it doesn’t hit the market as you wanted it to, look at what you might change. Price? Covers? Blurb? Ads? If that still doesn’t move the needle, accept this series didn’t land and move on to the next book.

12 – For the final book in the series, take your time. Make sure you tie up all the loose ends, and give fans an extravagant ending. If they’ve stuck with you through a number of books, they deserve it. So do your characters. When it’s done, give yourself a pat on the back. Good job, series lady!

If you want to know more about writing in series, tune into Lesbians Who Write every week to hear the wisdom of myself and TB Markinson. Wisdom is not guaranteed every single week. Laughs are, though. www.lesbianswhowrite.com